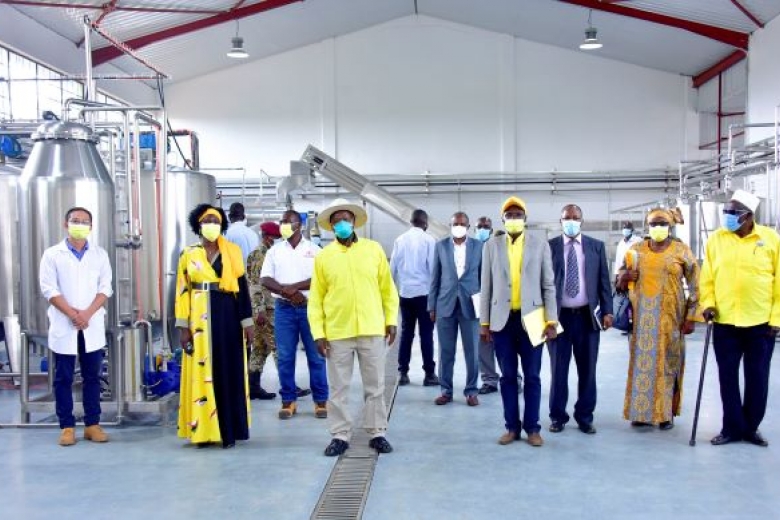 President Yoweri Kaguta Museveni has commissioned a new mango fruit factory in Yumbe district and applauded the people of West Nile for fully supporting the National revolution of emphasizing the people’s interests rather than their identity.

“Am happy that West Nile has joined the National Peoples revolution by rejecting politics of identity and going for the politics of interest and focusing on people’s needs,” President Museveni said adding that the investment despite being started by foreigners benefits Ugandans through job creation and paying taxes.

The factory is a complete 5-mt/hr Mango processing plant that is expected to start its full operations in May this year. It employs 200 direct employees and over 1500 indirect employees that will supply and deliver the fruits for the factory.

The hospital was re-habilitated and expanded by the Government of Uganda with support from OPEC, BADEA, and SFD.

It was glamour, as visibly excited NRM supporters lined up on both sides of Yumbe town streets through out in Aringa county to welcome the President who was waving to them from his car.

Museveni who thanked the people for supporting him and the NRM said that initially West Nile thought that Government was throwing stones at them not knowing it was meat in terms of development such as roads, electricity, water, education, health among others.

“This is what we are doing not only in Yumbe but in the whole of Uganda”. President Museveni said.

President Museveni said that because of the correct diagnosis of Uganda’s problem by the NRM of focusing on people’s needs and interests, Uganda has now recovered.

“NRM came from the old political parties which were based on religion and tribe, E.g. DP was for Catholics, UPC for protestants, Kabaka Yekka (KY) for Baganda. We sensed a problem of that path and decided to form NRM that focused on people’s needs. What does your religion or tribe has to do with roads or electricity,” he said, adding that Politics and governance are not a religious or tribal issue but a human needs issue.

“The road is a neutral facility for all people and it’s a responsibility of government like the hospitals, electricity, education etc. Because of the correct analysis, this is how Uganda has recovered and we have been able to do all these that past regimes failed to do” Mr. Museveni said.

The President revealed that by the time Yumbe became a district, it had a population of only 100, 000 people but because of the correct health policies of immunization by NRM, the population has now grown up to above 700,000 people.

He warned the people of West Nile against land fragmentation saying that whenever the head of a family passes on, children should never share the property of the deceased but rather divide and share profits out of the property. This, the President said, will preserve the Agricultural growth of Yumbe.

Regarding the Industrial park in Yumbe, the President said that now that government has started with the fruit factory, other factories will come up soon given the free land the community has provided for the same.

In the next government, the President said he will insist that government have a master plan in every area of the country with an aim of exploiting resources in that particular area.

Regarding compensations for the war victims and veterans, the President said that government is already planning to put Shs 11bns towards compensation, explaining that the delay was because government had to start with the needs of many people like roads, electricity etc including paying back debts since the colonial times.

“We started with these roads because they were serving many people. But there is nothing we can’t do and what we have not done, we shall do following the principle of prioritization,” he said.

The 1st deputy Prime Minister Gen. Moses Ali said that the President’s coming to Yumbe has given them confidence and promised to give him full support and the NRM Party.

“I want to guarantee you of success in West Nile. We have had 35 years of peace in Uganda under your leadership among others achievements” Gen. Moses Ali said.

In a Memorandum of understanding signed and presented to the President, leaders of Yumbe applauded the President for the Referral Hospital he commissioned and asked him to also build a perimeter wall around it and build a Blood Bank to enable the hospital operate effectively.

They re-affirmed their support to the President in the forthcoming general elections and the NRM party with a whopping 98% vote.

Present at the function were Ministers; Evelyn Anite, Joyce Moriku Kaduchu, MPs, political and religious leaders among others.