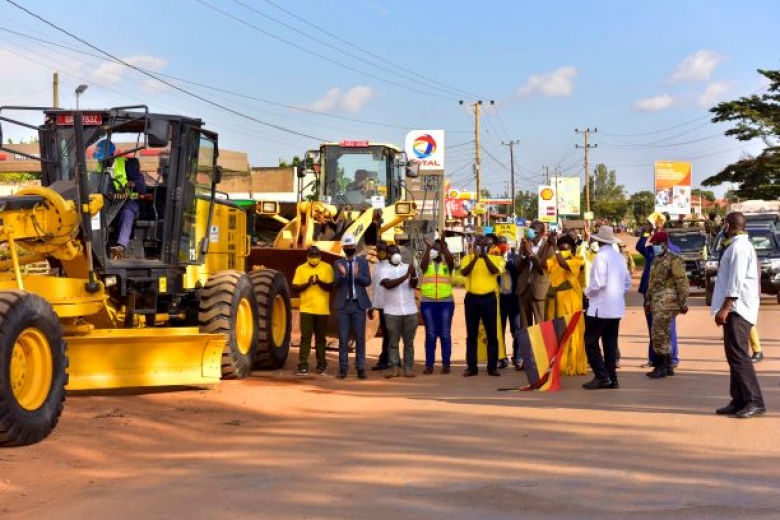 President Yoweri Museveni who is also the NRM Presidential candidate in the upcoming general elections has urged Ugandans to remain peaceful and assured the country that nobody will destabilize Uganda. He appealed to Ugandans to go out in big numbers and vote for their leaders.

“I repeat, no one will destabilize Uganda, we shall not allow anybody to do that. Ugandans should go and vote in peace and decide your leaders because its your constitutional right. Don’t fear anything, go and vote. If you want people to support you, convince them but don’t intimidate them,” he said.

The President was yesterday speaking shortly after performing a ground-breaking ceremony for the re-construction works of Mityana-Mubende road and upgrading Mityana town roads at Ssaza grounds in Mityana Municipality.

The reconstruction of the 86km Mityana-Mubende Road and upgrading of 14km of Mityana town roads is fully funded by the Government of Uganda with funds allocated from the National Roads Development and Maintenance Programme (NRDMP), which is in line with National Development Plan III.

Museveni said that government has done its developmental roles such as building roads, providing electricity, improving the health sector, education and water among others and urged the people to play their part by fighting poverty from their homes.

The President said he was happy to know from the Chairperson LCV Mityana district Mr. Joseph Kizige that in Mityana, people who are working for both the stomach and for money are now 50%.

“In my area, no one is still working for the stomach only, over 70% of the home steads work for both money and stomach. That is what I wish for Mityana and other parts in Uganda. I have been saying this for the last 25 years,” Mr. Museveni said.

President Museveni described the four roles of the people as fighting poverty from their homes, protecting themselves from HIV/Aids, avoiding alcoholism and supporting the NRM.

“We shall also work on Wamikka-Kalege -Bukatira to Ssemuto road because it is historical. So Let Government continue with its roles and you also work on yours,” he said.

The Minister of Works and Transport Hon. Gen. Edward Katumba Wamala said that the Mityana–Mubende road reconstruction project is another milestone for the NRM Government in achieving its strategic objective of ensuring the continued Connectivity of this Region with the rest of East Africa.

He applauded the residents for fully embracing the project and asked them to take advantage of the project to supply materials such as murram, aggregates, food supply among others.

He however, cautioned the communities and especially the youth who will benefit from the project to be organized, responsible and demonstrate high levels of work ethics.

The Executive Director of Uganda National Roads Authority (UNRA) in a statement read out by Eng. Samuel Muhoozi said that the reconstruction of Mityana-Mubende is aimed at improving access to social and economic development opportunities for the communities settled along the route.

“The Project at completion, will reduce vehicle-operating cost and travel time for the road users who ply this road route. This project is an addition to other projects in the region, which are undergoing upgrading and/or rehabilitation by UNRA in line with the NRM Manifesto,” Eng. Muhoozi said.

“We pray for our country in this election season and Covid -19 pandemic that has left many scared of their lives” Bishop Bukomeko said.

Earlier, President Museveni commissioned the rehabilitated Mityana General Hospital. He revealed that Government working with scientists is working on the Vaccine and a probable cure for Covid-19.

The Permanent Secretary Ministry of Health, Dr. Diana Atwine said that the Ministry of health has expanded and increased services and specialists at Mityana General Hospital.

“Mityana district receives 350,000 out-patients and over 4000 in-patients but still receives the same funding. I appeal to government to increase the funding of the hospital” Dr. Atwine said.