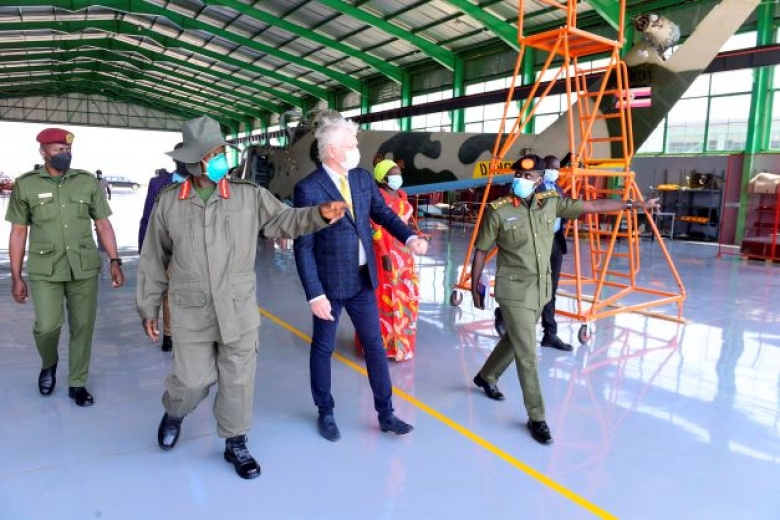 President Yoweri Museveni who is also the commander in Chief of the UPDF commissioned a helicopter maintenance,repair and overhaul plant at the Nakasongola Air Force Base that will also in the future upgrade chopper ware.

The MRO plant, the first of its kind in sub-Saharan Africa is a joint venture between the UPDF's commercial arm, the National Enterprise Corporation-NEC and Pro-heli International, a Russian Company and will be developed into a hub not only for the entire East African Region including UN Missions which use Russian helicopters but for the entire continent.

Speaking shortly after the official commissioning, Gen. Museveni hailed the Ministry of Defense for the initiative which he said is an example of vertical integration of the economy promised in the NRMs 10-Point Programme.

Point Number 5 of the programme was to build an independent, integrated, and self-sustaining national economy, a point he said is being fulfilled although some of the people didn't get it.

"The problem of Africa as summarized by the African union was that Africans were producing what they did not consume and consuming what they didn't produce. You find Africans producing cotton but some of them are going naked without clothes", he said. The President compared this to the Defense Service which he said uses equipment which is not made here, just like in almost 100 percent of the African countries and added that the facility to maintain, repair, Overhaul and in the future upgrade will go a long way in saving costs.

The President said the commissioning of the plant is among the modest steps taken to solve what he termed as ‘irrationality’ which is very costly.

"You're talking of saving money. You're using imported helicopters which you don't make or even maintain and repair. This is very serious," Museveni said.

The Helicopter Maintenance, Repair and Overhaul - MRO plant will help Uganda save about 3.5 million US dollars that have been spent on transportation and overhauling one helicopter outside Uganda.

“The UPDAF attached its technical personnel to the facility (in the field of Mechanics-Engine and Airframe; Avionics-Radio/Radar, Instruments and Electrical system, Armament-Electrical and Mechanical systems, Ground Support Equipment and in Quality Control and Quality Assurance). The first batch of 15 is already deployed at the facility and carrying out the Overhaul of the first Mi-24 under the supervision of Expatriates but in the long run we shall do all this work by ourselves. I thank the CAF for all the support he has given to this Project,” he said.

Gen. Sabiiti said the Ministry will make huge savings on costs of handling and freight.

“A huge saving will be made on the costs currently incurred by the Ministry of Defence/UPDF on clearing, handling and freight of the helicopters to repair stations abroad which is not less than USD$1,200,000 one way, for each helicopter. For example, the helicopter currently being worked on in the hanger here was recently ferried to the Nakasongola Facility just on a low loader at a cost of just USD 520 equivalent,” he said.

"This facility being commissioned today is able to do major repairs, service and overhaul of Mi-17 (Mi-8) and Mi-24 helicopters. This in turn saves the country loss of money in transportation and general turnaround time," he said.

According to the Commander UPDF Airforce Lt. Gen. Charles Lutaaya, Aircraft maintenance is generally expensive but with the commissioning of the MRO facility, there will be on time repair of components and reduced wastage to enhance air force combat readiness and employment capabilities.

"Assets will no longer be grounded for long periods due to lack of spares and technical expertise input as this can be now sourced from the MRO expertise," Lutaaya said.

The Chief of Defense Forces Gen Wilson Mbasu Mbadi said the facility will bring in more revenue into the economy as aircrafts from the region will be serviced here.

"I want therefore to thank your Excellency on behalf of the UPDF for continuously guiding us to help us build a formidable force in the region," Gen Mbadi said.