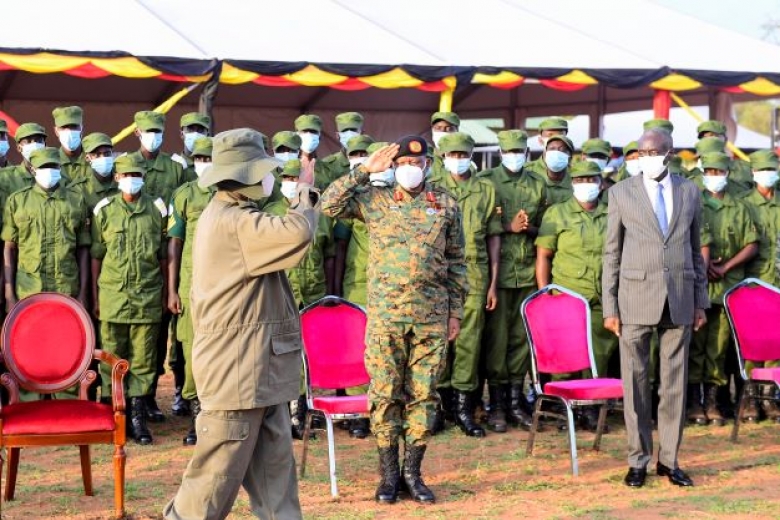 President Yoweri Kaguta Museveni who is also the Commander in Chief (C – I - C) of the Uganda People's Defense Forces (UPDF) has said Uganda will develop very fast if all security agencies do their role correctly in fighting crime to ensure peace and stability of the nation.

Gen. Museveni was speaking to staff of External Security Organisation (ESO) at Marine Training College School in Butiaba, Wantembo Barracks in Buliisa district where he also passed out 62 ESO trainees who have successfully completed their 10- months training course.

"I welcome you to ESO, the external wing of intelligence services," Museveni said.

Museveni noted that the work of defending and developing the country is well laid out and if everybody does their part, the country will develop very fast.

"When we came into the system, we ensured that there's a Gombolola Internal Security Officer (GISO) at the Sub-County. With that GISO, there should be no corruption in Uganda," he said, adding that Internal Security Organisation (ISO) should be dealing with political subversion like sectarianism, terrorism and hate speech.

He said the internal spy agency has no business arresting suspects, saying that is the role of police. He said ISO's role is to investigate and inform police.

On the role of ESO, Museveni highlighted the role of Ugandan embassies and foreign missions, and said their work is aimed at attracting investors to Uganda, getting markets for  products and attracting tourists to visit Uganda.

He said on top of monitoring the above duties done by Ambassadors, ESO is mandated to monitor security threats and terrorism and monitoring the diaspora to defuse the negative attitude and encourage positive ideas among Ugandans abroad. He noted that there are many Ugandans who fled to exile during Amin's time who have children in the Diaspora and that they do not know what is going on back home.

"Find them and teach them about the development back home. They don't know," H.E Museveni said.

"The role of ISO," he added, is therefore, to detect people who are dangerous, deal with internal crimes, political subversion, corruption and armed terrorism.

"So, if each one does his or her work, your country will develop very fast. Therefore, you should audit whatever you're doing," Museveni noted.

He promised to write a detailed brief about division of labor among security agencies "so that everybody is clear on what he or she is supposed to contribute".

"Today all security agencies in Uganda work very harmoniously which is very important for the security of the country," Muhwezi said.

"Because indiscipline takes away your time but also it interferes with your health which is an instrument of struggle. If you're healthy, there's nothing you cannot do," he said.

"You should determine the methods you should use; human and technical but all the time bearing security in mind. Whatever method you use Uganda should be secure," he stressed.

The Director General ESO, Ambassador Joseph Ocwet, thanked President Museveni for accepting to openly grace the first ceremony in the history of ESO in the last 35 years.

"On July 29 2003, you commissioned one ESO technical center in Kampala but your presence was very brief, the commissioning was strictly and exclusively attended by only 12 senior security officials. Therefore, today 19 years afterwards, it is the first time for you to be our Chief Guest while officiating about 200 intelligence officers in the biggest event that is organized by ESO," Ambassador Ocwet said.

He also thanked the President for improving the welfare of ESO staff which has also led to more developments abroad, up from 12 officers in only 12 missions in 2015.

He said the process of training intelligence officers and in particular inculcating youth civilians in the intelligence culture is not an event but a long tedious journey.

"It requires hard work, dedication, commitment, sacrifice, obedience and trust. These virtues are the ingredients of the sum total of intelligence discipline," he said, warning that indiscipline will not be condoned in ESO.

According to Ambassador Ocwet, in January this year, ESO embarked on establishing more spacious offices and construction has begun on top of Mutungo Hill in Kampala where they acquired 8 acres of land. He appealed for a financial boost from the President.

"However, we are severely constrained by lack of funds for completion of work because our start-up fund was less than a quarter of the required total cost of the project. Your Excellency, it is on the above premise that I hereby appeal  to you to kindly support ESO to establish our new headquarters in Mutungo so that we can relocate as soon as possible," Ocwet said.

Speaker after speaker congratulated President Museveni upon the successful admission of the DRC into the East African Community.

ESO is established by an Act of Parliament, the Security Organisations Act 1987 with a mandate to collect, analyze and process information related to external security threats to Uganda with the objective of informing national policy makers in Uganda.

The function was attended by among others the Chief of Defense Forces (CDF), Gen. Wilson Mbasu Mbadi, the Commander of the Marine Brigade, Brig Gen. Mike Nyarwa, the Commandant, Marine Training School, Maj. Joseph Ssekabira, staff of ESO and the trainees.