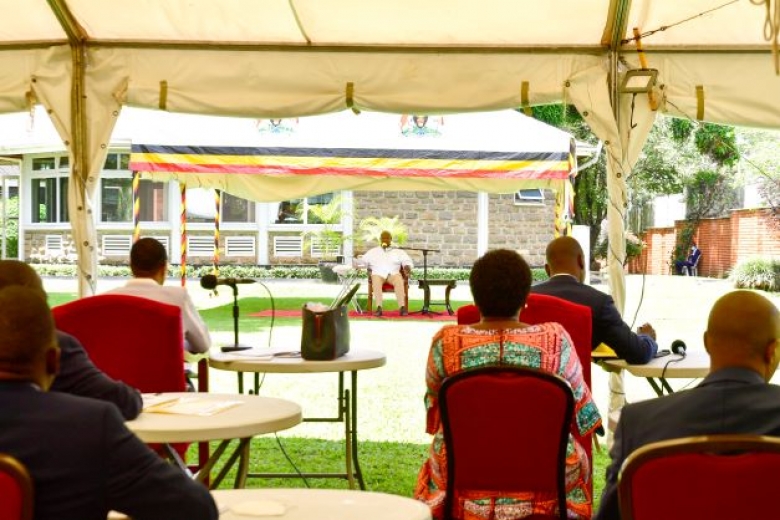 President Yoweri Museveni has said that when all the arms of government (Executive, Parliament, and Judiciary) work together, they yield good results for the country.

Using the crisis of load-shedding in 2005 as an example, the President said that the electricity shortage was caused by the Parliament at the time, which blocked major projects of dam construction.

“When we came into the government, Uganda was generating 60 megawatts and selling 30 to Kenya. I proposed to have more power dams, but parliament that time blocked it. This was a betrayal of that parliament,” the President said, adding, “When we won in 2006, I came back and met the cabinet. This time, I was ready for a showdown. I told them that I beg you, we must put more money in two areas: roads and electricity. The Cabinet agreed and called the caucus and they agreed. That’s how you can see all these roads constructed and we got out of that problem caused by the misuse of parliament. Am very glad that this parliament has moved well. I want to congratulate you,” he said.

Mr. Museveni was  meeting with the Parliamentary Commission led by the Speaker of Parliament, the Rt. Hon. Anita Annette Among.

The meeting, which was held at State Lodge Nakasero, was also attended by the Deputy speaker Hon. Thomas Tayebwa and Commissioners of Parliament.

Addressing the Parliamentary Commissioners, President Museveni counseled that the country does not belong to leaders but to the people of Uganda.

“When you have a leadership role you are a trustee, so you should know that the country does not belong to members of Parliament. It belongs to the people and other workers of the country,” President Museveni said.

On the issue of the Parliamentary budget, President Museveni appealed to Parliament not to misuse the committees of Parliament and said that committees should be funded but with small numbers.

He lauded Parliament’s decision to give the Constituency Development Fund to the Parish Development Model to run it, saying it’s a wise decision.

“Am glad you have brought back the constituency development money back to the Parish Development Model,” he said.

On the issue of increasing salaries for the Parliamentary staff, the President said that they can wait for now, but that does not mean that they are not thought about.

The President commended the 11th Parliament for a good start and handling of government business in a mature way. This way, he said, complements the NRA/NRM line of liberating Ugandans from poverty.

He appealed to Parliament to complement the historical mission of NRA/NRM to liberate the people from poverty.

“In the past, people used Parliament to set up parallel authorities to fight government programs. I have seen that this Parliament is not involved in those mistakes,” he said.

He supported the commission’s proposal of building their own offices for the Members of Parliament instead of renting which is costly.

The Speaker of Parliament, Rt. Hon. Anita Annet Among commended President Museveni for the support he has always given to Parliament and its leadership.

“We wish to extend our sincere thanks for your continued support. Thanks for the support for our late speaker. Your personal interest in the leadership of parliament has not been in vain and we shall never disappoint you. We shall work together to ensure good governance,” Among said.

The Speaker outlined some of the achievements registered by this parliament in the last 11 months that include passing of 12 bills out of the 20 presented.

“We have also passed 64 resolutions out of 78 and presented 31 committee reports,” she said.

Rt. Hon. Among revealed that they have had 83 plenary seating’s. According to the speaker, the commission has decided to take the constituency fund to be run under the Parish Development Model. She added that there is a need for Parliament to build its own space for MPs offices instead of renting.

We spend over Shs 20 billion for rent per year for MPs. We should instead use the money to build our own accommodation and save the government this money,” Among said.

The meeting was attended by the Prime Minister of Uganda, Rt. Hon. Robinah Nabbanja, the Minister of Finance, Hon. Matia Kasaijja, Clerk to Parliament, Hon. Adolf Mwesigye and Parliamentary Commissioners among others.