Transform the 68% Ugandans from subsistence to commercial production 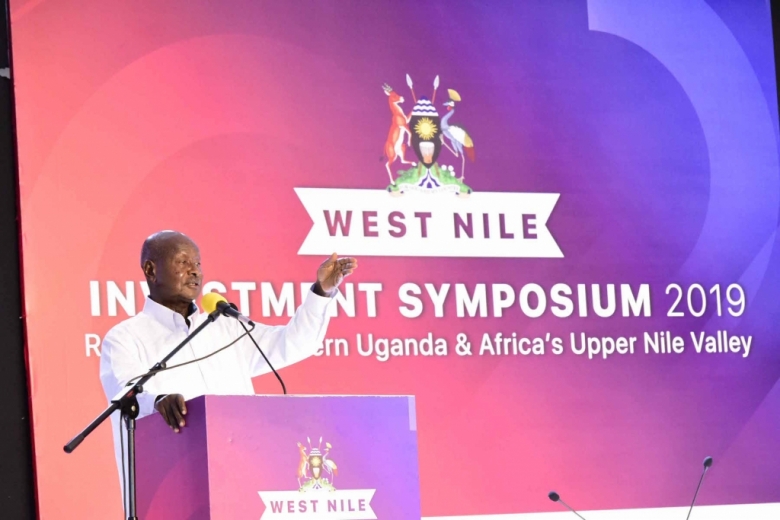 President Yoweri Museveni has appealed to all people and organisations working to promote trade and investment in Uganda to put more efforts towards uplifting the 68% of Uganda’s population who are still living the subsistence way of life so that they join money economy. He said that failure to do that would tantamount to all the country’s efforts towards promotion of trade, investment and industrialisation, not yielding meaningful results.

The President made the remarks while closing the two-day West Nile Investment Symposium 2019 at Muni University in Arua City in West Nile Sub-Region.

The symposium that run under the theme ‘Transformation of Africa’s Upper Nile Valley through Pan African Peace Building and Holistic Development’ was organised by the Department of Operation Wealth Creation (OWC) in partnership with the Uganda Investment Authority and Muni University, among others.

President Museveni said that to meaningfully promote trade, investment and industrial growth in Uganda, there is need to work to bring the majority 68% of the country’s population who are in subsistence farming into commercial farming and be part of the modern capital economy.

He added that this big fraction of the population are very important and if they join the money market they will be consumers who will not only boost the market but also equally be producers who will produce the much needed raw materials to sustain the industries.

“We can’t talk of attracting investment and industrialisation when the majority of Ugandans are still living in pre-capitalist economy and merely work for food. Even if you attract investors, if the country’s purchasing power is low, the factories will collapse because of lack of market,” he said.

“Getting the 68% of Ugandans into the money economy is crucial for us as a country but more so as leaders because leading people who have no money in a modern era, is criminal and a great betrayal to our people,” the President said.

Mr. Museveni also expressed happiness that the West Nile Investment Symposium had put the need for market integration high on the agenda noting that integration was important because investors are always attracted by bigger market.

He said that to attract investment, Uganda must ensure that goods in the country are produced cheaply and are of the high quality. He added that to do that, the country must address the cost of transport, electricity and the interest rates on money. He equally noted that high taxes hinder investment adding that in case of Uganda most of the taxes are on consumption and luxuries and not on production.

Turning to health matters, he used the occasion to warn the people against shaking hands well knowing that the Ebola virus is still in the neighbouring Democratic Republic of Congo.

The 1st Deputy Prime Minister and Leader of Government Business in Parliament, Gen. Moses Ali, commended the organisers of the symposium for enabling the world to understand the economic potential of the West Nile Region. He said that the region suffered due to political conflicts in that area and said that with the peace brought in by the Movement Government, the region had got a chance to develop. He asked the people of West Nile to jealously safeguard the peace and never allow themselves to return to the turbulent past.

State Minister for Northern Uganda, Hon. Kwiyucwiny Grace, said the symposium has helped to re-brand West Nile and Northern Uganda as a whole as well as marketing it to the world. She prayed that the region moves to reap a lot from the symposium. She also hailed the government PRDP programme that she noted had greatly uplifted the lives of the people of Northern Uganda especially in the sectors of Education, Health, infrastructure development and poverty eradication.

Chairing the meeting on African Capacity for Immediate Response to Crisis this morning, I made...