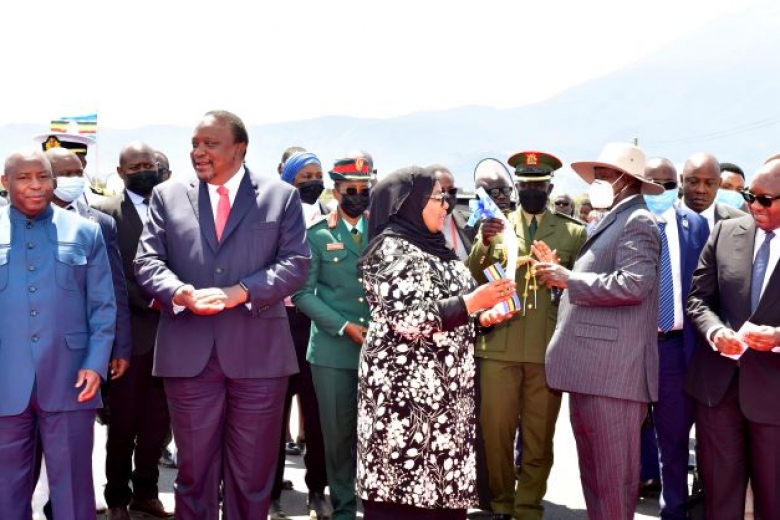 Africa must emphasize and support an indigenous entrepreneurial class, national capitalists who can help build and economically develop their countries, President Yoweri Museveni has said.

President Museveni was speaking shortly after a ceremony in which Heads of State of the East African Community commissioned the 42.4 kilometre Arusha by-pass road, one of the major road projects to be successfully completed under EAC cooperation.

Arusha Bypass forms part of the 15,000km East African Road Network and the Trans African Highway from Cape Town to Cairo through Gaborone.The road starts at Ngaramtoni and crosses Dodoma road at Kisongo.

President Museveni said there are many countries in the world with a lot of problems because of poor leadership but said they could learn from some countries that have had foresighted leaders like China.

“There are countries which have had a lot of problems in the world because of poor leadership. One country known as China was lucky to have very foresighted leaders especially Mao Tsetung and Deng Xiaoping. When we discuss here, I can see there is a need to utilise what some of the good leaders did,” he said.

Mao Zedong also known as Chairman Mao, was a Chinese communist revolutionary who was the founder of the People's Republic of China (PRC) while Deng Xiaoping was a Chinese revolutionary leader, military commander and statesman who led China through a series of far-reaching market-economy reforms earning him the reputation as the "Architect of Modern China". He contributed to China becoming the world's second largest economy.

“When you have these groups in society, things like what we have been discussing here, the Non Tarrif barriers (NTB) can be addressed. Look at how Mao helped china. He analysed the Chinese society and said it has four social classes; the feudalists, the bad people we must get rid of, the comprador bourgeoisie, these are people who make money on behalf of foreigners, commission agents, importers and the national bourgeoisie, the local capitalists that we should support to help build up our countries,” he said.

President Museveni said he was happy that the place from where they commissioned the road is now developed and expanded.

“I am just very happy! Today, we were at that place where we commissioned road. First of all, the place has expanded so much. It must have been bush far away in the past from here to the bus park. Now we have driven several kilomentres, the housing has improved. I congratulate the people of Tanzania for building up their country,” he said.

The President’s memories of Arusha are particularly nostalgic as this is the place where the regions elders launched the revival of the East African Community after its collapse in 1977.

“I was also remembering when we revived the community with mzee Moi. We had started with Hassan Mwinyi, I think by that time we launched, we did it in the stadium somewhere. I am just here to say how happy I am and to congratulate every body, the East Africans,” he said.

After a closed-door session for the Heads of State, Republic of Kenya’s President H.E Uhuru Kenyatta, who took over Chairmanship on 27th February 2021, handed over the bloc’s leadership to H.E Évariste Ndayishimiye, President of the Republic of Burundi in Arusha, Tanzania as the Chair of the ‪EAC. The Republic of South Sudan will serve as rapporteur.

President Uhuru Kenyatta, the out-going Chair of EAC Heads of State said infrastructure development is important for achieving the objective of a common market.

“Infrastructure is critical in achieving our common objective of being a Common Market,” he said.

According to the EAC, Infrastructure across EAC has reduced the transit time. Mombasa Port to Kigali through Uganda has reduced from 18 days in 2014 to 5 days (avg.) in 2021.

The EAC summit Heads of State appointed Hon. Justice Cheborion Barishaki from Uganda as judge in the appellate Division

and Justice Gacuko Leonard from Burundi as a judge in the First Instance Division of the East African Court of Justice.

The Summit of EAC Heads of State also appointed President Uhuru Kenyatta as facilitator to oversee the implementation of the Nairobi Process on the DRC, as provided for in the modality for the establishment and functioning of the EAC Panel of Eminent Persons and deployment of Special Envoys.

The President of the Federal Republic of Somalia who is a Special guest of the 22nd Ordinary Summit of the EAC Heads of State said his country is ready for admission to the bloc.

“We are ready for admission into the EAC!” H.E Hassan Sheikh Mohamud said.