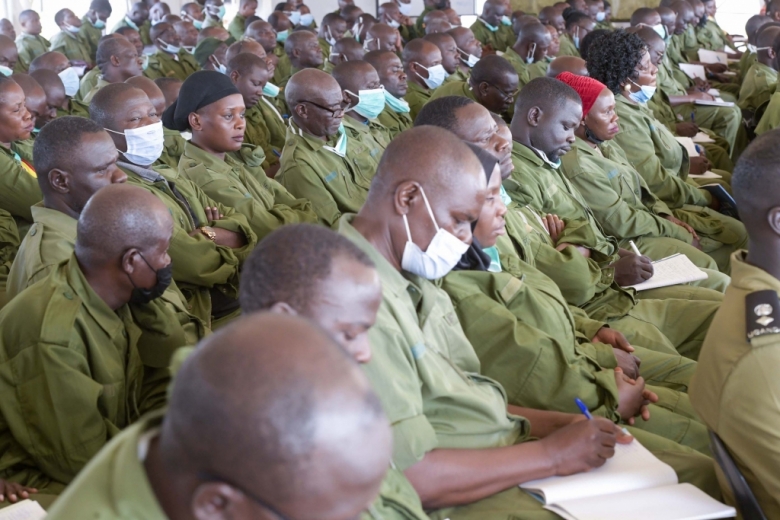 “Let’s agree on the strategy that the route to socio-economic transformation is to remove obstacles that prevent children from poor families from attending school. Those learners especially from rural schools shouldn't be charged, "President Museveni told Head Teachers.

President Museveni was this afternoon addressing 514 Secondary School Head Teachers from Central Buganda as well as regional and district coordinators of Patriotism Clubs who are attending a 10day Patriotism and Ideological training at the National Leadership Institute (NALI) in Kyankwanzi district. The training will end on the 14th January 2023.

He stressed that society can change through correct education and that relevant education will cause transformation in society.

“That is the reason why NRM in 1996 even when the economy was very small decided to introduce Universal Primary Education,” Gen Museveni revealed.

He was however dismayed to learn that the completion rate in UPE schools is now at 32 % caused by the expulsion of pupils from school because of non-payment of the so-called lunch fees.

“Can you imagine, do you have hopes of going to heaven? Get out of Lunch. Don’t chase children from school because of lunch. How does that help?" he wondered.

The President further advised that teachers can sensitize parents to organize packed lunch for their children and remove the money issue from universal education.

President Museveni earlier took the teachers through the principles that lead to the attainment of prosperity pointing out that for socio-economic transformation to be achieved, a new mindset has to be inculcated in society to create a new person that will move away from subsistence to commercial calculated agriculture. He added that all these require hard work.

“You must have a new society. You cannot have a peasant producing a peasant. My late father Mzee Kaguta left a modern African person,” he said.

Gen. Museveni also called on teachers to internalize the historical mission of prosperity that should get everybody involved in the production of goods and services to be sold in the internal, regional and international markets, pointing out that all the logic of NRM is linked thus promoting the principles of Patriotism and Pan-Africanism.

He castigated those who preach sectarianism describing them as devils that step on the plate of food.

The President also lectured Head Teachers on the legitimate historical mission that include prosperity for all, to achieve strategic security, to exploit the similarities in African heritage and brotherhood for prosperity.

He told Head Teachers of the 4-acre model while practicing intensive agriculture and leave extensive farming for people with huge chunks of land.

The Minister of Education and Sports also First Lady, Mrs. Janet Museveni pointed out that Head Teachers as managers of the education system in the country play a crucial role in the sector. She said it was extremely necessary to equip them with the knowledge, skills and tools that will enable them contribute positively to the development of the nation.

Mrs. Museveni noted with sadness the passing on of one of the participants of the training Mr. Majidu Mabirizi who was the Head teacher of Namasubi Senior Secondary School who died during the retreat.

She conveyed on behalf of the Ministry of Education and Sports and on her own behalf condolences to the family, relatives, friends and the community of Namasumbi SSS upon the death of Mr. Mabirizi.

“May his soul rest in eternal peace,” she prayed.

She however implored Head teachers to become visionaries with a clear purpose to act as role models for their teachers as well as the students. She urged them to concretize the culture of patriotism in their schools, cherish hard work, time management, honesty and accountability.

“I would like you to know that in whatever religion you believe you must know that God our creator is one. I want you to know that you have been put in a respectable place to take care of the children of this country. Do not take what has been entrusted to you for your personal use. Remember God is watching you and you will not be blessed,” she counseled.

Mrs. Museveni warned that the family of such a person will not benefit from the ill-gotten resources adding that a curse will be introduced to such a family.

She commended the National Secretariat for Patriotism for the job well-done adding that her ministry has over the years promoted patriotism in schools and today many clubs have been established to instill patriotic values to students and the youth.

“I very much appreciate the work of the National secretariat for Patriotism that inculcates the norms and values of patriotism in students and the youth,” she said.

Mrs. Museveni hoped that the knowledge, skills and tools acquired during the training will be translated into action and felt in the schooling system as well as in the life of the youth under their care.

The Commandant of NALI Brig. Gen Charles Magambo said the Institute is on a move to train a mass of knowledgeable and visionary leaders.

He said NALI is today diversifying its activities that include among others engaging in commercial agriculture. He said he is determined to transform the institute into a centre of excellence as there is need to train Ugandans who will be drivers of the country’s transformation.

The organizer of the training who is also the Personal Assistant to the President on Youth Affairs, Ms. Hellen Seku described the training as the sharpening of people who will perceive right from wrong. She called on the Head teachers to spread the knowledge and skills acquired to their communities and students.

She said similar training has already taken place in the regions of Lango, Acholi and West Nile.

The function was also attended by the NRM's Mobilization Director Hon. Rosemary Sseninde.

Others included officials from the education sector and those from Kyankwanzi district.