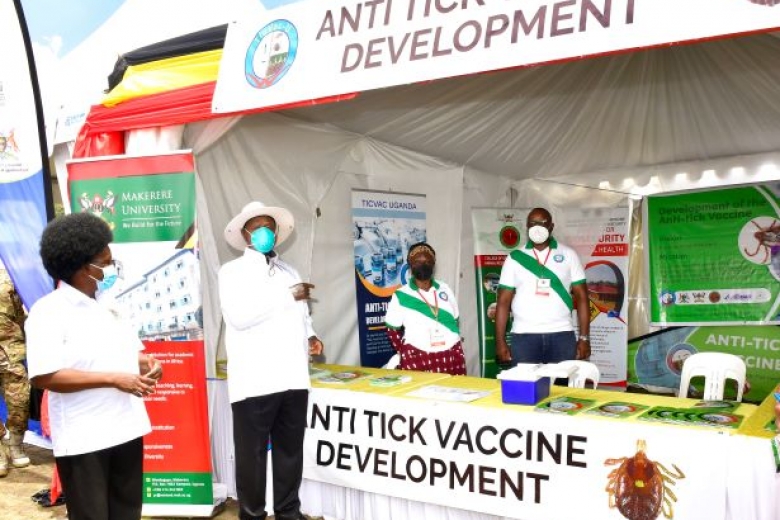 President Yoweri Museveni has said that the NRM Government has been working to promote the policy of science led industrial development for faster transformation.

“Science led industrial development has been our goal in government. With effect from June 2021, I put the Ministry of Science and Technology under the Office of the President so that it can be effectively managed and financed,” he said adding that one of the ventures that he has supported is the financing of Joint Clinical Research Centre (JCRC) in developing a diagnostic test for Covid-19 that produces results within 30 minutes.

“This is far better than the imported technology that is used for the same tests, he said.”

The President was today speaking at Kololo Independence Grounds where he was the Guest of Honour during celebrations to mark the World Science Week for Peace and Development. The celebrations were held under the theme, “The future of science technology and innovation in Uganda: Breaking the silos & leveraging synergies for a skilled and sustainable workforce for national economic transformation”.

The President revealed that the 1980 Lagos plan of action was initiated by UNESCO and required each country in Africa to establish a center with the aim of eradicating foreign dependency on research. He said that such centers were expected to coordinate all national research ventures.

He said that Uganda established its facility in 1970 adding that progress was hampered by the political instability at the time.

The President pointed out that the NRM Government established and emphasized the study of science at Mbarara University and emphasized that government would not change its position of increasing salaries for scientists in service.

He commended Professor David Kaahwa for developing the anti-tick vaccine and disclosed State House has made a lot of progress in developing the leather industry in Kawumu that was supervised by the former Comptroller, Lucy Nakyobe.

President Museveni reiterated that science must be used for import substitution and observed that processed coffee fetches 15 times the value of coffee when it is sold in its raw form.

He congratulated the scientists for using well the funds that government gave out and assured the nation that government would provide funds both directly and through UDB at low interest rates.

During the ceremony, the overall winner of the Uganda science winner’s award who was recognized by the President was a nine year old Ann Tramy Mpagi, a pupil of MST Junior School of p4 along the Kampala –Entebbe road. She innovated an e-learning app for the education sector.

Later, the President toured an exhibition showing a wide range of innovations including the electric vehicles, efforts to develop Covid vaccines, anti- tick vaccines and silk textiles. It also showed the ventures by Universities such as Makerere, IUIU, Kyambogo and Mbarara University of Science and Technology. He also launched 100 science text-books that were published by Ugandans.

She said that the learning app provides learning materials at all levels.

The Executive Director of UNESCO in Uganda, Prof. Eriabu Lugujo said that Africa cannot develop without science. He saluted the President for prioritizing science teachers through improved remunerations.

The Principle of the College of Veterinary medicine of Makerere University Prof. David Kabasa revealed that knowledge developed was being shared with communities.