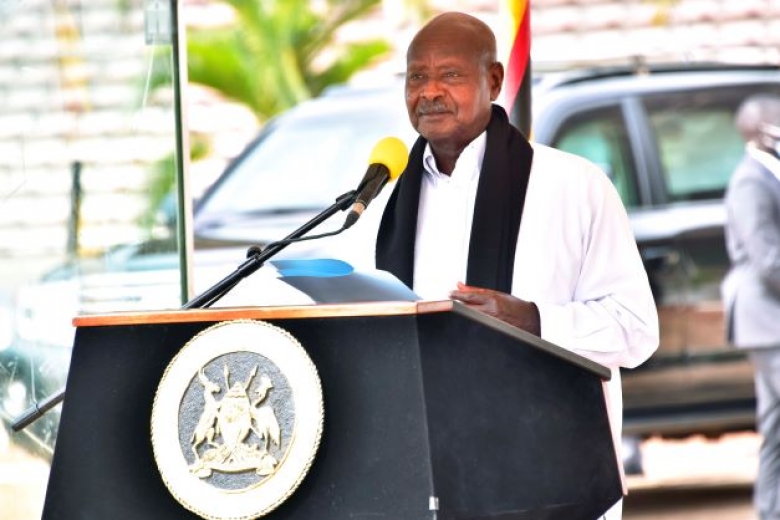 I am pleased to join you today at this important event where Uganda joins the rest of the world to raise awareness of the AIDS pandemic caused by the spread of HIV infection and remembering those who have died of the disease.

Today marks 33 years since the commemoration of the first World AIDS Day in 1988. It is approximately 40 years since the first case of AIDS was discovered in Uganda in Kalisizo hospital coming from the shores of Lake Victoria in Rakai District.

My story with Aids starts around 1983 when we were in the bush fighting. There was one of our soldiers who got sick and the doctors we were with tried everything possible to treat him. They treated Malaria and many other things but they couldn’t know what the person was suffering from until that person died. We came to know that when we were going to the bush, this soldier had hidden in Rakai District which, at that time, apparently, had become the epi-centre of the epidemic. We didn’t know what had killed that boy. I tried to talk with Doctor Bata and Doctor Besigye about this boy but nobody had an explanation. I am always interested in health issues. Then around 1984, I started hearing on the radio that there was a new sickness of homosexuals and that it had no medicine. I said that is no problem. We don’t have many homosexuals here. Around 1985, I was listening to the BBC and there was a female doctor in Zambia from Italy, I think her name was Dr. Ombelly. She said, “No. This disease does not affect only homosexuals. I have seen a number of patients who are not homosexuals in my clinic”. I called my Army officers who were with me in the bush and I warned them.

I forgot about the problem and we were busy with other things including taking over Kampala until September, 1986 when I had gone to attend the Non-aligned Movement Conference in Harare-Zimbabwe. During the conference, the Cuban leader, the late Dr. Fidel Castrol, told me that there is a big problem in my country. Apparently, we had sent 60 soldiers from here to Cuba for training. For us here, we were not checking for Aids but the Cubans were already aware and they were checking all these people. When our soldiers went, 60 of them were tested and 18 of them were HIV positive-which is 30 percent of the 60. Doctor Castrol’s system is very efficient. He told me that those 18 were going to be sent back and the others would stay and finish their course. When I came back, I called a meeting in Republic house.

When the ARVs came, we were told that somebody to use them must keep testing until his CD4 count falls to 500. These are part of the soldiers of the body, part of the white blood cells. I was informed that a normal human being normally has 800. That is when they fall to 500. That’s when they should use those ARVs that had come that time. I asked them, why does he not start from the beginning? They said that these ARVS are also poisonous. They fight the AIDS virus but also do damage to the body. So it is better the body fights on its own for some time and when you see it loosing, then you come in with this weapon which kills the virus but also damages the body. It is Michelle Sidibe who told me that the strategy had changed. He said as soon as you test and find that you have the virus, you take the drugs. I said what has happened now because the other time they were saying the drugs were also very bad? They said drugs had come and that when you take them early, it is better than when you delay. Nobody had told me. He also told me that when you are taking those anti retrovirals, you are no-longer as infective as the one who is not.

I would like to recognize those who joined and tirelessly fought AIDS to give Ugandans hope. For example, Ms. Noeline Kaleeba for coming up with the idea of The AIDS Support Organization (TASO) that gave Ugandans hope.

We have, therefore, come a long way in fighting against HIV and AIDS and today I can say with confidence that we are winning this battle.

There are about 37.7 million People who are Living with HIV Globally, 1.5 million people were newly infected with HIV in 2020 alone, 73% of adults living with HIV received Lifelong Antiretroviral Therapy (ART) and 680,000 people died from HIV-related illness.

The main message for young people remains abstinence to focus on their studies until they are old enough and prepared to face the world. Parents are a foundation of your families and your children depend on you for their safety and well-being. Parents should, therefore, spend quality time with your children; setting an example for them to follow, equipping the children with skills on how to deal with peer pressure, understanding and discussing unique needs of your children, creating an enabling environment at home to freely discuss issues and supporting them to complete school.

I thank leaders of various categories but especially leaders of faith for guiding your congregations. I encourage you to continue with the same efforts of providing clear and accurate information to those who come to places of worship about how to prevent themselves acquiring HIV.   These communication campaigns worked for us before and should be used even now.

Uganda, like other countries, has had to deal with the double jeopardy of HIV/AIDS and the COVID 19 pandemic. COVID 19 rapidly spread across continents bringing with it death, disruptions in the national and global economy as well as disruptions in social life.

For a long time, Uganda’s HIV response has benefited from donor support and I thank all donors for their generosity and support. However, we know that donor support has been reducing with competing priorities. Uganda has been prioritizing the HIV responses and allocated additional funds especially towards purchase of antiretroviral drugs whose budget has doubled over the last couple of years.

I have been informed that men continue to die more because they delay to go for HIV testing and hence often start on treatment late. I encourage men to go and test for HIV and if found positive will be counselled and started on treatment. If found negative they will be told how to avoid acquiring HIV.

Behavior change is still key in the fight against HIV/AIDS. We should continue to disseminate information on abstinence, being faithful and correct and consistent condom use to prevent HIV. In addition, we should increase knowledge on benefits of HIV testing, treatment and drug adherence as the pathway to viral suppression.

As we commemorate this day, let us remember that everyone has a role to play in preventing HIV/AIDS. It is not only a job for the government leaders or the health professionals. As a father, mother, community member, leader, activist, in whatever capacity you may be, it is only when we join hands together in solidarity and share the responsibility that we will End AIDS as a public health threat by 2030.

I urge local leaders to guide your communities to dialogue and reflect on community owned solutions and pay particular attention to eliminating poverty and creating wealth because these are key underlying factors for HIV acquisition. Conscious efforts should be geared on how to reach the young generation with messages through the use of social media.

HIV testing is the gateway to accessing treatment. When a person with HIV is identified early, they are put on treatment early and if they adhere to the treatment, they will achieve viral suppression making them less likely to transmit HIV. This will contribute greatly to helping our Country achieve the goal of ending AIDS by 2030 and also our vision 2040. I, therefore, urge all Ugandans to test for HIV because treatment is available.

This is my key message to Ugandans to remain committed towards ending AIDS in this country.

I take this opportunity to thank the Uganda AIDS Commission for coordinating the commemoration of this World AIDS Day. I thank the Development partners and all stakeholders who are supporting us in the fight against HIV and AIDS. Please continue with the struggle, we shall conquer this virus.

Lastly, I continue to remind all Ugandans that COVID -19 is still here, therefore, go to the nearest health centre and get vaccinated. Wear your mask every time you are amidst other people, wash your hands with soap and keep a social distance. Let us keep safe.

I thank you all.