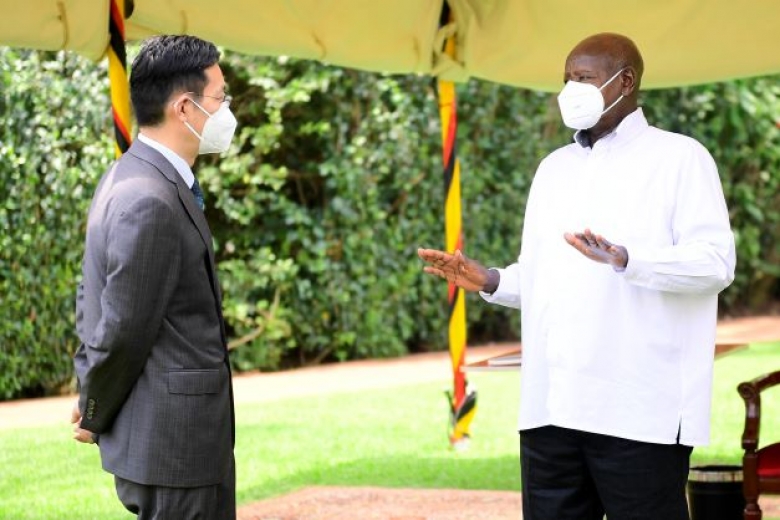 President Yoweri Museveni has welcomed China's new development model on the African continent in which Uganda is among the countries set to benefit.

While meeting a delegation from the Chinese embassy in Uganda led by the Ambassador of the People's Republic of China to Uganda, H.E Zhang Lizhong, and a team from the ministries of Foreign Affairs and Finance at State House in Entebbe today, Museveni said Uganda is now focused on guiding its people on how to eradicate poverty at household level to achieve socio-economic transformation.

"The Ministry of Finance should engage with the Chinese ambassador on where they can come in on the issue of poverty eradication. Because in the past they were supporting mainly infrastructure. You can propose to them where they could help us," Museveni said.

"From the Chinese side, we hope to have a cooperation model focusing on more handy and practical technological projects with remarkable effects on the livelihoods of the people of Uganda," Ambassador  Lizhong said.

On technology transfer, President Museveni noted that some Ugandan companies like automobile manufacturers are already working with China bilaterally and it will be of great importance to further the already existing partnership.

On vaccine development, the President said: "We are already developing our vaccines but if our Chinese friends want to participate, we shall welcome them."

According to H.E Lizhong, China enjoys strong ties with the people and Government of Uganda which he said is evident through the cooperation in various sectors including Trade, Industrial and Infrastructure Development, and the close collaboration and cooperation the two countries have in regional and international affairs.

"With your guidance and that of President Xi Jinping, our relationship has moved forward strongly. As a matter of fact, our political mutual trust has been enhanced and our relationship is at its best time in history," Ambassador Lizhong said.

He said this comes at a time when the two countries are celebrating the 60 years' Anniversary of the establishment of diplomatic relations. A series of activities will be held this year.

Over the past 60 years, the China- Uganda economic and trade relations have made significant progress.

In 2019, the relationship between Uganda and China was upgraded to the level of Comprehensive Cooperation Partnership with a Joint Commission on Trade, Economic, Investment and Technical Cooperation (JCTEIT) as a bilateral framework of economic cooperation.