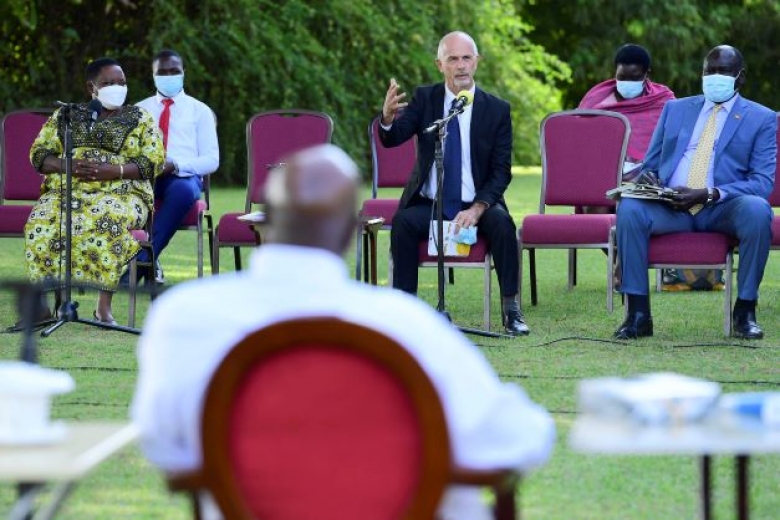 President Yoweri Museveni has hailed the outgoing UNHCR representative to Uganda Joël Boutroue for his service to the refugee community in Uganda and described him as a ‘trouble-shooter’ who came as a diplomat and is welcome to stay as a citizen.

President Yoweri Museveni was today meeting Mr. Boutroue following the end of his tour of duty as UNHCRs representative to Uganda. He is also finally retiring after over 38 years of active service to the United Nations.

"Refugees are our people. Our tribes are the same. There is no way we can discriminate against them. We however need support to deal with the relief and other logistics including protecting the environment,” he said.

The outgoing UNHCR representative Joël Boutroue praised Uganda’s refugee policy describing it as exemplary and called on the United Nations for more support to the country.

He said Uganda’s best refugee practice is in danger of being overshadowed by Europe’s attention to the war between Ukraine and Russia, and said Uganda’s generosity alone cannot stay forever.

“Europe has been shaken up by the war between Ukraine and Russia. We hope they don’t forget Africa. Uganda cannot be a victim. Its best refugee practice is in danger if there is no support. Generosity alone cannot stay forever. We need to do more for Uganda,” Joël Boutroue said.

Joël Boutroue has been UNHCR Representative to Uganda since April 2018. He joined the UN in 1984. He served as Deputy Special Representative of the UN Secretary General/UN Resident Coordinator/Humanitarian Coordinator and UNDP Representative in Haiti from the end of 2006 to the end of 2009. He was Deputy Director of the Coordination and Response Division of the Office for the Coordination of Humanitarian Affairs (OCHA). From 1994 to 1996, Boutroue was deployed as the Head of UNHCR in North Kivu, Democratic Republic of the Congo following the Rwandan genocide. From 1984 to 1994, he worked for UNHCR covering the Persian Gulf crisis (1991), Tajikistan crisis (1993), Malawi (1987 to 1991) and Sudan (1984 to 1987).

Low-income countries continue to host a disproportionately large
share of the global displaced population. According to the World Bank income classification for 2021, low-income countries host 22 percent of people displaced across borders. This includes very large refugee populations in Uganda, Sudan, Ethiopia, Chad and the Democratic Republic of the Congo.

Despite generous contributions from donors, UNHCR’s 2022 refugee response remains severely underfunded with only US $30 million received by the end of the first quarter in 2022 against the US $343.4 million appeal.

Mr. Boutroue, said the severe underfunding of the refugee response and the increased needs in the country will make responding to this emergency and maintaining existing services for the 1.5 million refugees more challenging.