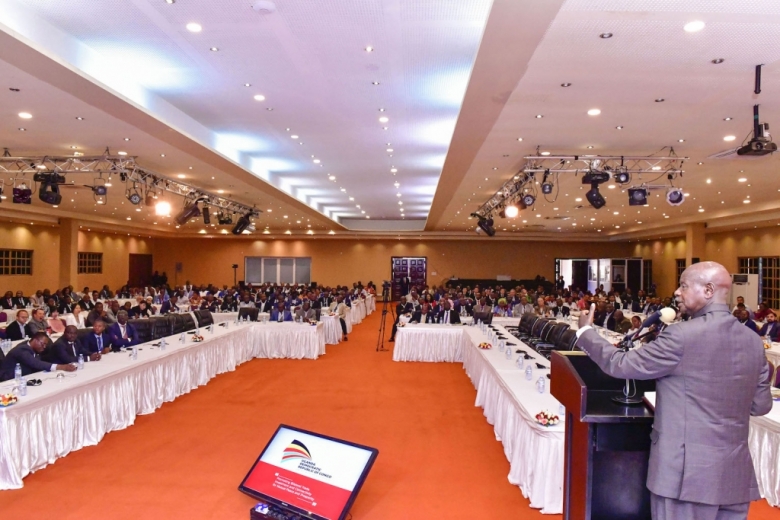 President Yoweri Museveni has strongly urged African countries to promote trade as one of the strategies that will ensure the survival of the continent and the prosperity of the people.

“Today, Africans must know that trade is a matter of survival. If you don’t trade, you will collapse because prosperity comes from trade,” he said.

The President was opening the Uganda-Democratic Republic of Congo (DRC) joint Business Forum at Munyonyo that is running under the theme ‘Promoting Bilateral Trade for Mutual Peace and Prosperity’.

The one-day conference was attended by business delegations from  Uganda and neighbouring Democratic Republic of Congo (DRC) as well as the line Ministers from the 2 countries.

President Museveni, who warmly welcomed the DRC delegation to Uganda informing them that we are one people divided by the colonial boundaries, said trade in the region started  very many years ago.

“Congo and East Africa have been trading since time immemorial,” he observed.

The President cited products that were being traded from the Indian Ocean coast such as textiles, glass, beads and guns in exchange with the interior areas that included such products like copper, ivory, iron and cows.

Mr. Museveni asserted that by facilitating trade, a number of challenges are resolved including job creation, taxes that will help in the sectors of infrastructure building namely roads, health and education.

The President added that the market factor is equally crucial noting that the Ugandan population of 42 million and that of the DRC of 80 million is not enough. He cited China as a country that has a guaranteed market of 1.3 billion people and yet Child is still struggling for markets in other countries.

“We need the market of all of Africa and there should be no taxes at the borders. What we need to concentrate on is the quality  of production that can be done in the country where it is cheapest and there will be comparative advantages,” he said.

He said that once a product is made cheaply in one country such as the DRC, her neighbor like Uganda can buy the product and vice-versa thus promoting trade on  the continent.

“This is good for everybody. Africans would get cheap and plenty of quality goods and the business would grow,” he noted.

He called on the participants of the conference to frankly discuss obstacles to trade between Uganda and DRC as he and his counterpart, President Felix Tshisekedi, who is on a State visit to Uganda, will on their part discuss the way forward to maximize the prosperity of the people of DRC, East Africa and Africa as a whole.

The Minister of External Trade in the DRC, Jean Lucien Busa, who led the DRC delegation at the Forum, assured the Uganda business community of available investment opportunities as well as tax incentives in his country. He appreciated the cooperation between the 2 countries in various areas.

The Chairperson of the Uganda Private Sector Foundation, Patrick Bitature, pointed out some of the challenges the business community faces especially at the border that include immigration issues, the road net work in the DRC as well as the high air travel costs.

The Ministers of State for Trade, Michael Werikhe and that of Investments, Evelyn Anite, were present.

By PPU reporter President Yoweri Kaguta Museveni has bid farewell to the outgoing Ambassador of...

I commissioned operations of seven small to medium manufacturing and assembly plants...