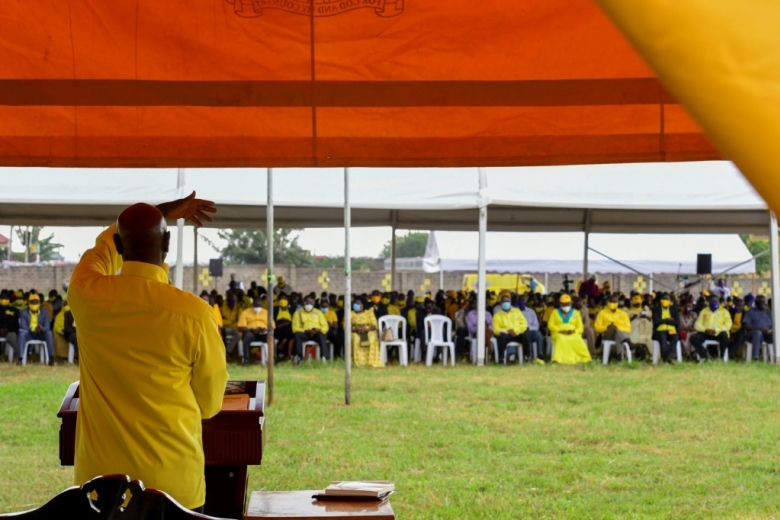 President Yoweri Museveni who is also the NRM Presidential Flag bearer has told the people of Bugisu in a radio message, that he will consider a proposal by Bugisu leaders to degazette part of the Mutoto Forest reserve in Bunghoko-Mutoto subcounty to allow for the expansion of Mbale city.

According to reports, Mutoto forest is an artificial forest reserve that was started by colonialists to feed wood to the commercial train services then. The forest was later inherited by the National Forest authority as a forest reserve. The Bungokho-Mutoto forest reserve located about three Kilometers from Mbale central business district along the Mbale–Tororo highway is also home to Bugisu’s cultural Imbalu grounds.

Earlier while speaking to NRM Flag bearers at Parliament, LCV chairpersons, the incumbents, incase the lost in the primaries, NRM executives at the District and Municipal level, NRM league chairpersons at District and Municipal level, Youth, Women, the Elderly and PWD council chairpersons at district level and NRM sub-county Chairpersons from the districts of Manafwa, Namisindwa, Mbale, and Bududa at a leaders’ meeting held in Busigu sub region in Mbale district, at Mbale Senior Secondary school playgrounds, Museveni informed the NRM leaders to remind the people that NRM is the only party that has been able to deal with the historical problems of Uganda and Africa to a large extent, adding that it is for this reason that the people should continue to support the NRM to stay in power.

He said his party, the NRM has been able to stay in power because it had chosen to focus on peoples common interests rather than their identity.

“Right now, we are fighting the pandemic which is affecting everyone. There is no corona, which is for Bagisu or Bagwere. Our focus right now is to stop its spread and find a cure,” he said.

Mr. Museveni urged supporters that during their door-to-door and house-to-house campaigns, they should sensitize the people about the need to shift from the traditional subsistence agriculture to modern agro-production for improved incomes and food security. He reiterated that they must put emphasis on people working for their pocket and not only for their stomachs.

The Chairperson of the NRM women's League and Woman MP flag bearer for Mbale District, Lydia Wanyoto Mutende assured the President of the district's support in the coming elections. She also informed the President that people of Mbale were adhering to the Covid-19 SoPs, as they were not gathering to dance on their traditional Kadodi song in support of the party.

President Museveni received traditional Masaba stool and spear to mark the beginning of his scientific campaigns in Bugisu region.