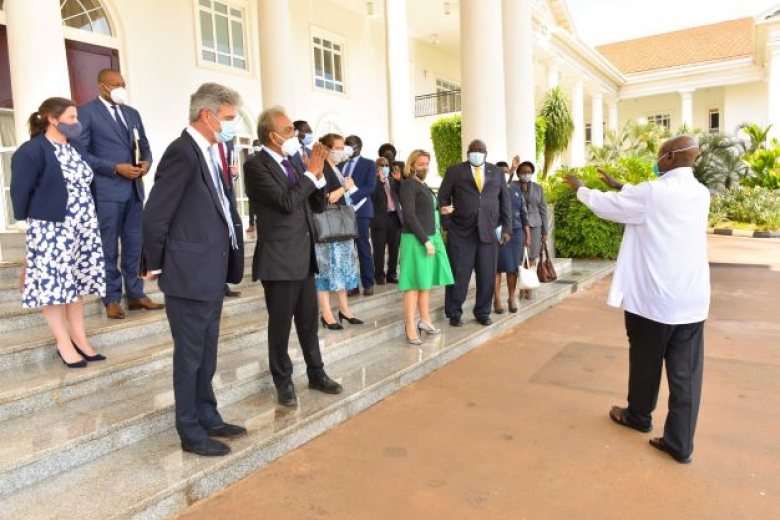 President Yoweri Museveni has said that Uganda can produce anything as long as the people are well organized and guided.

“We can produce any agro-product as long as the people are mobilized. Our people have the capacity to produce a lot of coffee and fruits on small pieces of land. We have sensitized them in the production of various high value products on small acreages. A small-scale farmer can generate up to Ush 18 million (US $ 5,000) per acre of coffee per year,” he said.

The President was speaking during a meeting with the visiting British Prime Minister’s Trade Envoy to Uganda, Rwanda and Democratic Republic of Congo, Lord Dolar Popat at State House, Entebbe.

The President and his guests discussed a wide range of issues with the main focus on developing the export of agro-products to Britain.

He assured them that the Uganda Government was fully committed towards ensuring high quality agro-products for export.

He was pleased to learn that one of the investors was interested in establishing a modern hospital in Hoima District in western Uganda. He noted that such a facility would save Ugandans from the burden of travelling abroad for medical tourism. He said that the medical facility would attract many people from Uganda, the region and Africa at large since the service was essential.

The President and his guests also discussed matters pertaining to increased electricity generation and transmission.

The British Prime Minister’s Trade envoy to Uganda, Lord Dolar Popat expressed his sympathy to President Museveni and the people of Uganda over the recent bomb explosions in Uganda.

He said his government is interested in the purchase of various products from Uganda, including coffee, maize, sugar, wheat and barley. He revealed that his team would connect Ugandans to the buyers in the United Kingdom.

“We want Uganda Airlines to ferry at least 10 tons of goods on every trip it makes to London. We want to use U.K. finances to build silos for the agro-Products. We have financed the Industrial Park in Namanve and we are interested in financing Kiira Motors in its vehicle project,” he said.

He assured the President that his government was keen in supporting Uganda in the industrialization process.

The British High Commissioner to Uganda, H.E. Kate Airey briefed President Museveni on the progress of the proposed expansion of electricity generation and transmission.

One of the investors, Lord Benjamin Mancroft briefed President Museveni on the 300 beds hospital that he plans to build in Hoima. He said that the project would cost US $ 150 million and that the construction would commence in January 2022.