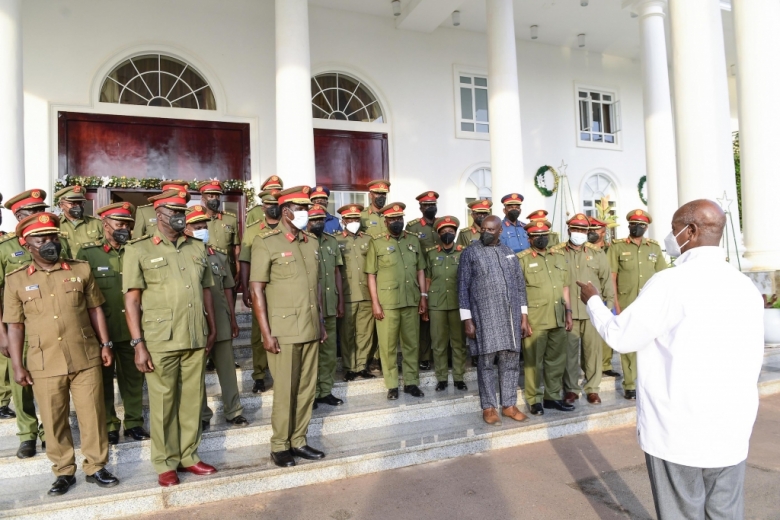 President Yoweri Museveni has reiterated the need for regional Integration of East African nations to ensure the prosperity of the people of the region as well as for strategic security.

“The starting point is, how does a country build prosperity for its citizens? Prosperity does not have miracle wealth. It will come through every citizen participating in the production of goods and services for sell,” the President asserted.

The 18 senior army officers who form the first intake of the college have been undertaking a one- year course on National Security and Strategic studies.

The students had two field study tours; on their internal field tour, the group toured several areas of strategic economic importance like the Karuma Hydro Power Station, Rift Valley Oil Graven in Hoima-Masindi and Nwoya, Tororo Cement Industry and Soroti Juice Factory as well as progressive fruit farmers in Soroti, among others. The external tour took them to Turkey and India.

During the question-and-answer interface, President Museveni informed the student officers that prosperity means having enough food, clothing, quality accommodation good health and method of mobility. He, therefore, emphasized the need for the Integration of the East African countries for a bigger market for the products that will be produced which will in turn create wealth and prosperity for the citizens of Uganda and the neighboring countries.

He added that the regional market of over 300 million people may not be enough, hence the need for the African market, calling for Pan-Africanism. Gen.  Museveni said that is why NRM stood for the pillars of Patriotism, Pan- Africanism, Socio-economic development and Democracy.

On industrialisation, President Museveni said the sector is moving very well as the necessary prerequisites are being addressed. He cited the provision of the incentives that include low costs of infrastructure, provision of cheap electricity, resources that are channeled through the Uganda Development Bank (UDB) and many others.

“We are now beginning to get very many investors. They are going to build factories in Kabale for steel, Tororo for phosphates, a refinery for gold, etc, with the low cost of money, labour, transport and raw materials."

On the concern about the bituminized roads that are beginning to show some defects, President Museveni told the student officers that plans are underway to maintain the roads that have been constructed including marrum ones.

Gen. Museveni and his guests also discussed a wide range of issues of national development as well as those of regional and international interest.

Passing a vote of thanks, Col. Mawa Muhindo commended President Museveni for the establishment of the college adding that they have learnt a lot from the course. He further thanked the President for hosting them and on behalf of the student delegation wished him a merry Christmas and a Happy New Year.