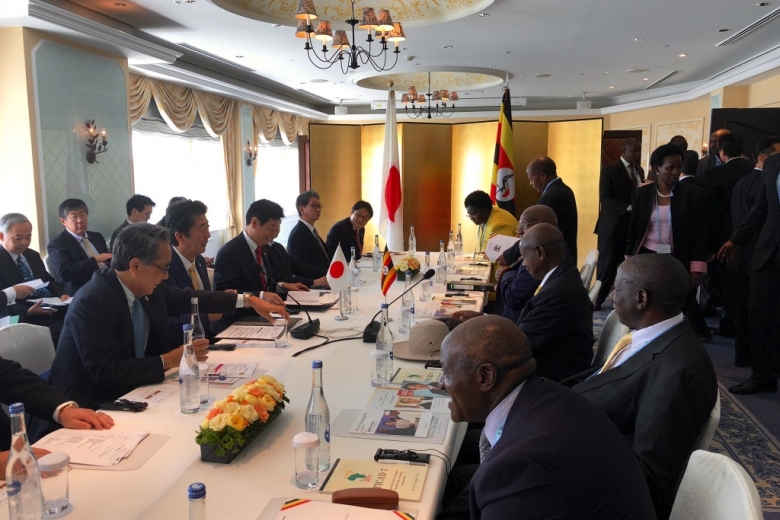 The President was today meeting the Prime Minister of Japan Shinzo Abe in a bilateral meeting held at the Intercontinental Hotel Yokohama Grand Hotel in Yokohama Japan. The President is in Japan on a 3-day official visit where he is attending the TICAD7 conference.

“Thank you for the support to infrastructure development including the bridge, roads, electricity and vocational institutions in Uganda. We want to buy five more units for the towns,” he said.

The President urged the Japanese government which is constructing the Kampala fly-over projects to decongest the city, to consider raising the height of the fly-overs to accommodate the SGR railway project, adding that this would also call for increased funding to cater for the changes.

The Japanese government is constructing various project including the Kibuye-Busega inter-exchange, Kampala fly-over projects to decongest the city, the proposed new Karuma bridge, a UNIDO training institute in Luwero to manage road equipment and a universal Health coverage project.

Museveni called on Prime Minister Abe to support the private sector in Japan to invest in Uganda and promote trade saying Japan has already opened its markets to Africa with zero taxi and no quota.

On the situation in North Korea, President Museveni said he was in support of the unity of North and South Korea for stability and more balance in the region.

The Prime Minister Shinzo Abe thanked the President for his role in peace keeping and security in the region and welcomed the improved relationship between Uganda and Rwanda.

He commended Uganda’s role in the fight against ebola and expressed his desire to deepen cooperation between the two countries in the health sector. He informed President Museveni that Japan will extend support worth 2.45billion yen towards traffic control in the city fly-over project and another 260million Yen support through UNIDO for the construction of a training facility for maintenance work of construction machinery in Luwero as well as support towards improved agriculture production for export.

The PM agreed to promote high quality investments in Uganda.

On the issue of altering the height of the fly-overs to accommodate the SGR project, PM Abe said a technical team would carry out a survey. He also agreed to a request for five more road units to cover urban areas.

PM Abe encouraged Uganda to use the facility put in place by Japan Bank for International Cooperation to support and facilitate investments in the country. He requested Uganda to submit details regarding the Karuma bridge, expressway at Busega through the Ambassador of Japan to Uganda for consideration.

Japan agreed to seriously consider the candidature of Justice Ssebutinde on reciprocal basis.

On North Korea, PM Abe said the situation there is different because N. Korea is not wishing for unification but is instead developing nuclear weapons and this is a challenge to peace. “This challenge must be resolved by implementing the United Nations Security Resolutions. Unification is an ideal for the future,” he said.