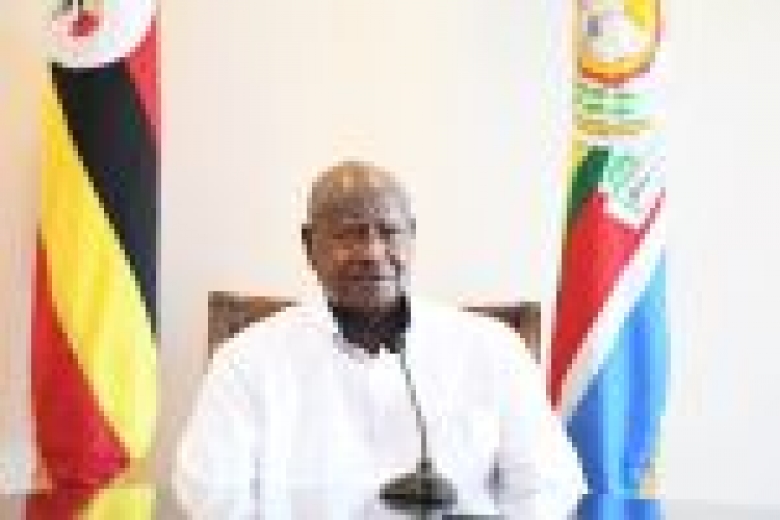 President Yoweri Museveni has mourned the Late president of Tanzania His Excellency John Magufuli describing him as a patriot who could not tolerate corruption and the meddling of outside countries into the affairs of Tanzania.

“It is therefore a great shock that such a useful leader has died so early when he was beginning to make an impact on his country,” he said.

President Museveni has directed that all flags be flown at half-mast until the day of the funeral.

"In honour of his contribution, I direct all the flags in Uganda to fly at half- mast until the day of his burial. May the Almighty God Rest His Soul in Eternal Peace," he said.

He said Tanzania is a very important country in the history of Africa.

He added that on the account of the good leadership of the patriotic leader Mwalimu Julius Nyerere, Tanzania became a base of all the freedom fighters in Africa. He said by the time OAU was formed in Addis Ababa in 1963, only 36 African countries had got independence, and almost 20 were still under colonial rule.

President Museveni noted that because of the unwillingness by the colonialists to grant African countries their independence, Africans had decided that if anybody would not do that freely, the Africans would fight with arms.

Unfortunately many African countries did not support this move of armed struggle. However, Mwalimu Nyerere, Mzee Kaunda in East Africa and Kwame Nkurumah, Sekou Ture of Guinea Bissau, Ben Bella of Algeria and Kamara Abdu Nasser of Egypt supported the struggle.

The President added that on account of Tanzania being near the colonized countries of Mozambique, Rhodesia now Zimbabwe, S. Africa, Angola, Namibia, Tanzania and Zambia, operationally, were the most decisive. All the freedom fighters were in Dar-es-Salaam or Lusaka.

He said these were the FRELIMO of Mozambique, ZANU and ZAPU of Zimbabwe, ANC and PAC of South Africa, SWAPO of Namibia and the MPLA of Angola.

President Museveni in his message added that by 1974 the African peoples army of Mozambique, especially FRELIMO inflicted a decisive defeat on for their freedom.

The President noted that Mwalimu Nyerere and Mzee Kaunda made a big contribution in the struggle, supported by the people of Tanzania, and eventually South Africa and Namibia got their independence.

He said in Uganda, Tanzania did not let Ugandans down when fighting Iddi Amin and that support was extended by Mwalimu Julius Nyerere in 1985 to Uganda.

“In Tanzania, Mwalimu played a huge role in uniting the people of the country, including the use of Kiswahili as a common language and that is why Tanzania is peaceful for many years,” he said.

He said when the Late Magufuli came to power he had a lot of enthusiasm for Mwalimu’s thinking of Unity and Patriotism.

“He did not want Tanzania to be dictated to by external forces…very allergic to external meddling,” he noted.

He added that H.E. Magufuli was also very enthusiastic on the East African Federation.

Mr. Museveni also pointed out that President Magufuli never entertained foreign travel, a move that made the country save a lot of funds he used in very many projects including that of the Airlines.

“One of the things he did, which we should learn from him was to stop foreign travel by the parasitic civil servants who are always squandering scarce resources by travelling abroad,” he said.

The President recalled that he last talked to the late Tanzanian leader on the day of the East African Summit. And was later represented by his Vice President at the virtual conference.