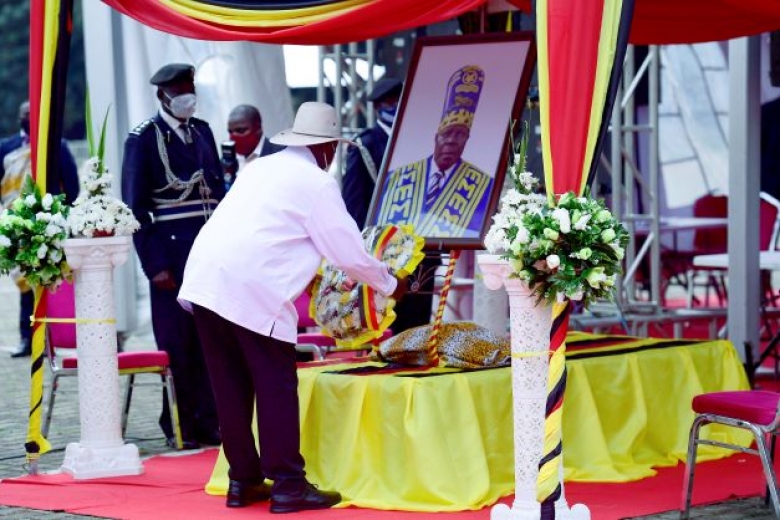 President Yoweri Museveni led Ugandans to celebrate the life of His Highness the Emorimor, Augustine Kadugala Osuban Lemukol, who died on February 5, 2022.

This was during an official requiem mass held at Kololo Independence Grounds in Kampala.

Speaking during the ceremony, President Museveni saluted the role of Teso Cultural Institution in particular and other cultural institutions in Uganda for promoting unity and culture that has contributed to the development of Uganda.

The President, however, appealed to the cultural leaders to desist from forming alternative governments in their communities, noting that they should instead play their role of adding value to Uganda.

“I am here to say goodbye to Mzee Osuban but most importantly, to bear testimony to his contribution which others can emulate. Do not form alternative government; your role is to add value to Uganda”.

He said that the problem of Africa has never been anything else but, rather, poor governance.

“Yesterday, I was coming from Dakar, Senegal. It took us seven hours and seven minutes.  This is Africa. It’s huge, great with everything (rivers, forests, etc). Therefore, the problem of Africa has just been governance. ‘How are we managed politically?’ Is the question,” he said.

The NRM, the President said, is a group of people that came because of what was going on at that time to change the destiny of Uganda and Africa.

He pointed out the three points they singled out as their focus including; prosperity, strategic security and brotherhood.

“How can the people of Uganda and Africa become prosperous in a modern way, through production of goods and services and marketing them? We realized that to achieve number one and two, we must emphasize the brotherhood of African people,” he said.

He said that Uganda is on a long journey of development and whatever government does is deliberate and well thought out.

When we restored the cultural institutions, our analysis was, if they are used properly they can play a contributory role,” he said.

The President saluted the cultural institutions for promoting culture and language.

The President commended the late Emorimor Osuban for uniting the people of Teso in Uganda and others living in countries like Kenya, South Sudan and Ethiopia.

“He played his roles very well. He united his people the Iteso, not only the Iteso of Uganda but also the ones in Pallisa, Bukedi, Tororo, and even in Kenya, Ethiopia, etc,” he said.

On the issue of development, Museveni saluted the late Emorimor for working towards developing his community in particular and Uganda in general.

“I have never heard that Mzee Osuban was meddling in these issues of politics, legislation, etc. I express my condolence to family, the Iteso community and all Ugandans and wish him eternal rest in the afterlife,” the President condoled.

He called for a policy to purchase new vehicles for cultural leaders every five years instead of depending on donations.

The Vice President, Rtd. Major Jesca Alupo, thanked the President for attending the official funeral in person and commended him for restoring the cultural institutions which have played a big development role.

She added, “Papa Emorimor lived up to our expectations. He lived the aspiration of his title. He united his people. He visited all his people from all these countries around like South Sudan, Ethiopia and Kenya,” Alupo, herself hailing from Katakwi in Teso, said.

She appealed to cultural leaders to reciprocate on the affirmative support to promote the government’s socio-economic transformation programme.

The Minister of Gender, Labor and Social development, Hon. Betty Amongi, thanked Government for according Emorimor an official burial.

“Thank you for commiserating with the people of Teso. We are paying tribute to a person with a rich understanding of leadership, a custodian and promoter of unity and the culture of the people of Teso,” Amongi said.

Amongi said that the late Emorimor embraced the principle of inclusiveness and unity of his people.

“I call upon people especially the cultural leaders to emulate this noble role.”

The Prime Minister of Teso Cultural Institution, Mr. Omare Augustine Okurut, thanked President Museveni and his government for the support, both moral and financial, given to the late Emorimor during the time he was sick in hospital until he breathed his last.

“We are here to celebrate the life well lived by the Emorimor Papa Iteso. Thank you, Your Excellency, for the support during the time he was in hospital and also according him an official burial,” Omare said.

The family members, represented by the late’s son, Mr. Osuban Francis, equally thanked President Museveni and the people of Uganda for standing with them during this trying moment.

He noted that the late was a very good listener who wanted to connect with all people from all regions and also emphasized the importance of family as fundamental factor that promotes peace and unity between people.

Monsignor Gerald Kalumba, the Parish Priest of Christ the King Church, who conducted mass appealed to believers to acknowledge their sins and repent, saying the kingdom of God belongs to them.

“My brothers and sisters, let us acknowledge our sins and so prepare ourselves to celebrate the sacred mysteries,” Kalumba said during the prayers.

Born on the August 12, 1934, to the late Isirairi Okalebo, the late Emorimor Papa Iteso Lemukol was a retired professional Agricultural specialist with vast experience in Agronomy, Agricultural policy and Agricultural institutions.

In 1998, Lemukol was elected unopposed by over 2, 000 delegates from Teso- Uganda and Teso Kenya during a delegates conference held in Soroti, to become Emorimor Papa Iteso a position he has held till death.

Emorimor is a traditional cultural office which has been in existence amongst the Iteso from immemorial. The main responsibility of Emorimor is to nurture all Iteso to ensure that the value system they observe is protected and promoted. The holder of the revered portfolio ensures that unity and harmony prevail amongst the Iteso and their neighbors.