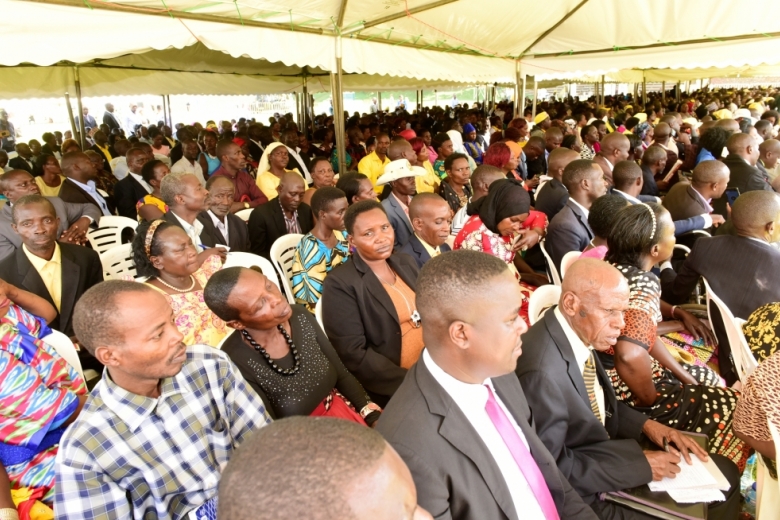 President Yoweri Museveni has said that government is planning to install electronic tracking devices in vehicles and motorcycles to be able to identify them in case issues like accidents and crime arise. He added that this was not going to invade anybody’s privacy but would help to follow up easily and combat crime.

This was during a wealth and job creation meeting held at Lugogo Cricket ground In Kampala where the President met NRM leaders of Kampala, Wakiso Districts and the business community.

Regarding security, President Museveni was happy to report that according to the Inspector General of Police (IGP), one of the criminals who had been involved in the killing of a boda boda rider and stealing his victims’s motorcycle in an incident in Mengo was arrested, and that the other had been killed by the mob as he was trying to steal another motorcycle.

He attributed this development to the effectiveness of the CCTV cameras that were able to capture the image of the criminals, which police followed. He affirmed that nobody would destroy the peace of Uganda that the country has had for a very long time.

“Recently we had crimes arising from weevils in the Police who used to work with the criminals and which we found out. We are still trying to remove more weevils from the Police Force,” he said.

Turning to the issue of health, President Museveni informed the leaders that they should put emphasis on preventing diseases as opposed to looking for the cure. He advised them to encourage the people to engage in good health practices such as taking the available vaccines, like the Hepatitis vaccine, be clean, eat well, stop living promiscuous life and sleep under mosquito nets as well as preaching against early pregnancies to avoid complications.

Turning to the issue of increasing household incomes, President Museveni called upon the leaders to teach people in the villages to shift from subsistence to commercial calculative agriculture. He advised them to embrace the four-acre model and noted that activities, such as mushroom growing, are not only limited to villages but can also be grown in the pre-urban centers’ settings.

President Museveni called upon the leaders to advise the people to desist from land -fragmentation and instead practice the Western world method of formulating companies with shares that keeps property in the families and brings about profits.

Land fragmentation is not a good practice. We must change it or else the families will be poor,” he said.

On the issue of manufacturing and setting up factories, Mr. Museveni said that government was going to set up small factories like the ones he had done in Najeera and Nsambya. He urged the leaders to support making and buying products in Uganda as opposed to importing them; adding that this would create jobs for the youth and save the country money used on imports.

“I visited the lufula here in Kampala and they told me that they slaughter 300 cows a day. That means that there is leather from these skin-hides. We can employ the youth through this by manufacturing shoes, bags, chair seats, to mention but a few,” he explained.

In a joint memorandum from Kampala and Wakiso Districts that was presented by Engineer Andrew Kitata, of KCCA , President Museveni was thanked for  starting  up the ‘skilling the girl child” programme that was initiated in Kampala and is now being taken up in other districts. The memorandum proposed that government projects aimed at increaseing household incomes be done at the parish level and be based on what people can do. The districts proposed the development of Artisan Parks to improvise work premises, churn out quality products and secure market opportunities for the youth groups. A request was made for Wakiso to become a City.

During the meeting President Museveni was also endorsed by the leaders of the 2 Districts as the NRM sole candidate for 2021 elections. He was also gifted with a Kanzu and a spear to continue leading the country.