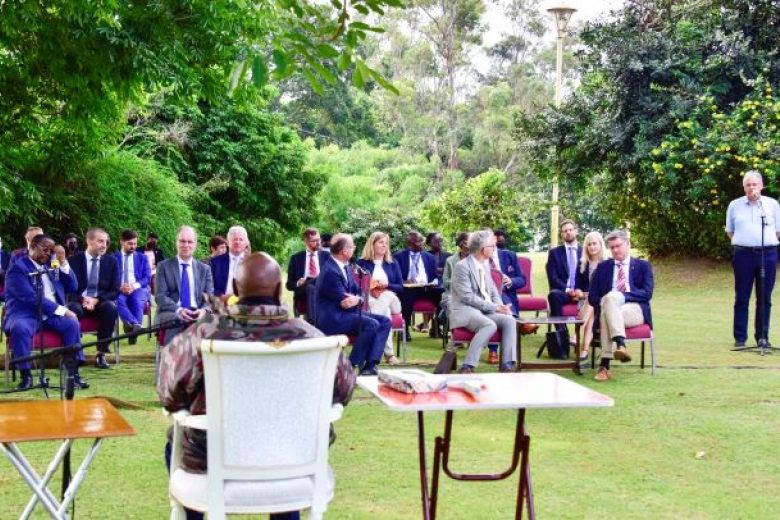 President Yoweri Museveni has this evening received a delegation from Germany led by Minister of State and Head of the State Chancellery, Mr.Oliver Schenk.

The President met and held a meeting with the delegation at State House, Entebbe.

H.E Museveni and his guests discussed possible business opportunities as well as cooperation in the areas of medicine from plants between Uganda and Germany.

The meeting was also attended by the German Ambassador to Uganda, H.E Mathias Schauer, who introduced the group to the President.

President Museveni told the group that comprised Members of Parliament, Civil Society, academicians, media and NGOs that Africa has a lot of natural resources with big business opportunities that need to be utilized.

He noted that the Chinese have undertaken a lot of business investments in Africa than European investors.

He, however, said that he is glad that the Europeans have woken up and started to invest in some of the African countries like Uganda.

"I am glad to see groups like this coming to Africa where there is a lot of business potential," he said.

The President said that one can undertake a lot of production with little input in Uganda but there must be somebody to buy what is produced, saying that is why there is need to integrate the markets in Africa through blocs like COMESA.

He told the German investors that they can undertake production in Uganda and sell their products in Uganda, East Africa, Africa and to countries like US, Germany, among others.

"We want the whole human race to have a prosperous life," he said.

He thanked the Ugandan Ambassador to Germany, H.E Danny Ssozi, for bringing the delegation to Uganda.

He noted that antibiotics resistance and medicine from plants has a very big potential, adding that this cooperation is wonderful for the two countries. He noted that Penicillin and Covidex are some of the medicines made from plants which he said have worked well.

The President further asked the German entrepreneurs to co-invest with Uganda in the area of processing bananas for food.