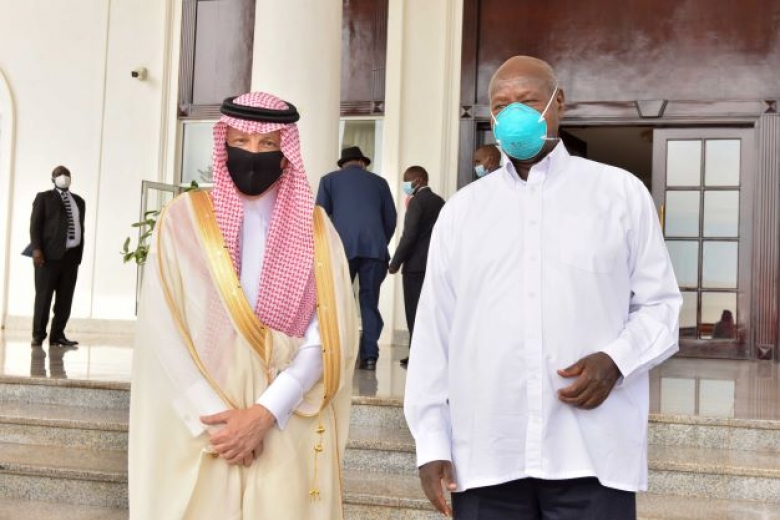 President Yoweri Museveni has paid tribute to King Mohammed Bin Salman of Saudi Arabia for pledging a donation of US $ 68 million towards humanitarian support with particular reference to the refugees hosted in Uganda.

The President was today speaking during a meeting with the Saudi Arabia Minister of State for African Affairs Mr. Ahmed Abdulaziz Kattan who is in Uganda for a 3-day official visit.

“I thank Saudi Arabia for the US $68 million donation for humanitarian support. I also want the Uganda Investment Authority to give Saudi Arabia all the support it needs to enable it invest in agro- processing. We have broad opportunities in mining. You can build a steel industry that will reduce the cost of steel in Uganda,” he said, adding that currently the country was using recycled steel which is not strong enough to erect big structures such as dams.

He urged the Saudi Arabia delegation to invest in tourism and promised to visit Saudi Arabia soon noting that Arabs are part of Africa as was the case in countries such as Egypt, Tunisia, Morocco and Mauritania most of which are linked both in North Africa, the East African Coast and through religion.

President Museveni commended the Saudi Arabia government for its donation of US$7million, which was used in the construction of the King Fahd Plaza in Kampala. He said that the facility was built to work as an endowment to support the Islamic University in Uganda.

The President thanked King Salman for sending the State Minister for African Affairs to visit Uganda.

Briefing his guest on the recent acts of terrorism in the country the President said that Uganda’s stand on terrorism was very clear, pointing out that a terrorists target soft targets.

“If one fights an army, we recognize him as a fighter, but if a group fights against civilians then it is an act of terrorism,” he said.

He commended Saudi Arabia on the establishment of the Counter-terrorism center.

The United Nations Counter-Terrorism Centre (UNCCT) was established in September 2011 to promote international counter-terrorism cooperation and support Member States in the implementation of the Global Counter-Terrorism Strategy through a voluntary contribution of the Government of Saudi Arabia.

The visiting Saudi Arabian Minister of State for African Affairs Mr. Ahmed Abdulaziz Kattan saluted President Museveni for the warm reception accorded to his delegation and reaffirmed the cooperation between his country and Uganda. He pledged a donation of US $ 68 million towards humanitarian aid and said that they want to support Uganda in dealing with the refugees coming from the neighboring countries.

The Minister thanked the Uganda Government for appointing Saudi Air as the official airline serving the 2 countries. He revealed that Saudi Arabia was the founder of the Counter- terrorism Centre.

He invited the President to attend the Afro –Arab Summit.