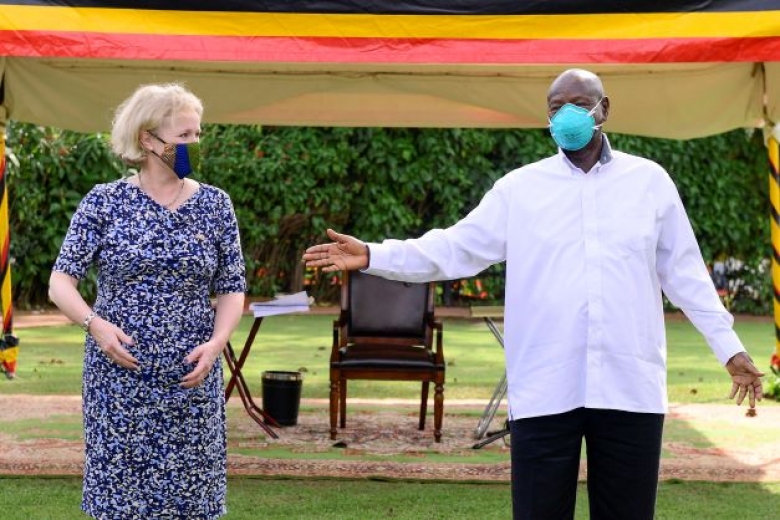 President Yoweri Museveni has strongly defended Uganda’s human rights record and said for the last 60 years, their struggle has been about promoting and defending Human Rights.

“There is a lot of misinformation, our whole struggle for the last 60 years has been about human rights. But you get misinformation from some of the groups who want to promote anarchy and when you try to stop them, they say you have violated their human rights.

I can assure you that we are very seasoned people,” he said.

“Our army would not be in Somalia for more than 13 years, a Muslim society and yet majority of our people are not Muslims and they have been there peacefully. If we didn’t know how to observe human rights, that is an acid test of how disciplined we are. Yes, groups make mistakes and we punish them. The problem would be impunity. We don’t have impunity here. We have got full accountability,” he said.

The President however acknowledged that they are still dealing with a pre capitalist society, some of whom still have traditional ideas like beating people.

“This one we are fighting it. This is part of the old system of police and society. We combine punishment with education for new actors,” he said.

“Our understanding of Civil Society are people who are not making a living out of activism but are concerned about the rights of the people. But if you have foreign funded groups claiming to be fighting for human rights, when they are just paid like foreign agents, sometimes even paid by foreign governments who come to influence our future. It is a very serious issue. Is an agent of a foreign government a civil society activist? That one we are not convinced,” he said.

The President said he discussed with the Norwegian Ambassador and agreed that the sovereignty of the country should give a no objection to all after deciding whether it is a social economic issue or it is political interference.

“I don’t see why, especially somebody who wants democracy would want external manipulation. The issue is not empowering women to grow vegetables, but whether we should allow foreigners who oppose our government politically to determine our destiny,” he said.

On the issue of economic empowerment, President Museveni said the challenge here is to deal with the of  issue prosperity and how do you create wealth for our people by producing goods and services which they must sell.

“If you don’t sell, it will not become wealth, you will not get prosperity out of it,” he said.

He said Ugandans are now waking up and realizing that the Uganda market is not enough, and they now need the East African Market.

“You have been such a wise person with some of the regional issues. I thank you for the leadership on South Sudan. I want to hear your views about the difficult situation in Ethiopia and Somalia,” he said.

Ms. Ford said her government is very keen to increase investment and trade between the two countries to build stronger economics and increase trade and investment to grow the economy.

She said the United Kingdom through its department of Health has donated to Uganda one million extra doses of the Covid-19 AstraZeneca vaccines that will be arriving in the country shortly.