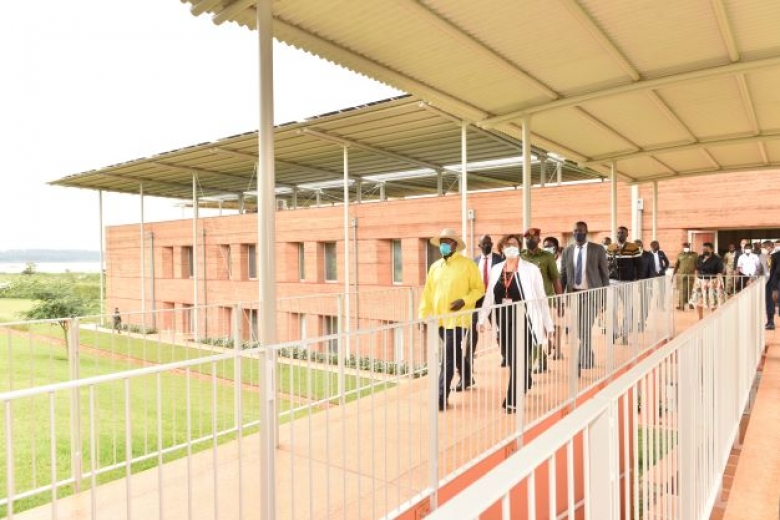 President Yoweri Museveni has paid glowing tribute Dr. Gino Strada an Italian war surgeon, human rights and peace activist and founder of EMERGENCY, a recognized international non-governmental organization for the ultra-modern children surgical hospital in Entebbe, saying he has left a special gift for humanity right at the heart of the equator.

Dr. Strada died in August this year before the official commissioning of the hospital that he was looking forward to.

“Jesus died 2000 years ago but is remembered today because of his good deeds. Although Dr. Gino died, he has left behind a testimony of his character and contribution to humanity. The Italians have done something special for humanity right at the centre of the equator,” the President said.

President Museveni said the hospital, built on 30 acres of land donated by the UPDF (Special Forces Command) has got a number of interesting aspects; including the founder being a wonderful Christian with the concept of “caring about your neighbour as you love yourself” the core of Christianity; the architect as much as possible using nature and being environmentally friendly; and the donor Ms. Paola Coin, a rich, smart, small lady from the Italian city of Venus known for its story of Shylock, being a great philanthropist who donated US$8million towards construction of the hospital.

“This land was for the SFC cattle farm. When I heard of the hospital, I said this was a more life saving effort than the cows. We gave them 30 acres. I am happy that there is another idea of adding a nurses training centre which can be part of this facility. We must see how to take advantage of the dedication by our partners from Italy. If we can have a nursing training school where they can impact both the skills and the passion,” he said.

The President later presented the 50th Uganda independence golden medal to the founder Dr. Gino Strada (Posthumously), the donor Ms. Paola Coin, the architect Mr.Renzo Piano, Rossella Miccio, President of EMERGENCY and Pietro Parrino, Director of EMERGENCY Field Operations Department. The 50th Independence Golden medal is given to individuals by the President in recognition of their outstanding service and loyalty to the country

The Entebbe hospital will become a referral point for surgery from patients across the continent. It is the second facility in EMERGENCY’s African Network of Medical Excellence (ANME), after EMERGENCY’s Salam Centre for Cardiac Surgery, built in Khartoum, Sudan, in 2007, which has treated patients from over 30 countries.

Situated on the banks of Lake Victoria, EMERGENCY’s Children’s Surgical Hospital opened its doors on Monday 19 April, but due to Covid-19 restrictions, the opening ceremony took place after six months of activities.

The facility has admitted 345 patients since opening, whilst 1,185 patients have been treated as outpatients. 355 surgical operations have taken place and the average patient age is five years old.

Ms. Rossella Miccio, president of EMERGENCY said the hospital is rapidly becoming a referral point for paediatric elective surgery, in Uganda and beyond, as we are receiving patients from around the country and will soon open the doors to provide free of charge surgical care to children from neighbouring countries.

“These first six months of activity clearly confirmed that there is a strong need for paediatric elective surgery in the region. A real partnership between international organizations and Ugandan institutions and professionals can pave the way to strengthen local capacity and to provide continuous secondary and tertiary quality care,” she said.

At full capacity, the hospital will employ 385 local people, including 179 medical workers. The facility will be dedicated to training local staff, who will play an integral role improving paediatric surgery and medical care in the country.

The Minister of Health Dr. Ruth Acheng said the facility cost Shs 117 billion and Uganda Government has facilitated it with a 20% contribution and will continue paying 20% of the running costs for 8 years until it is handed over to the Ugandan government.