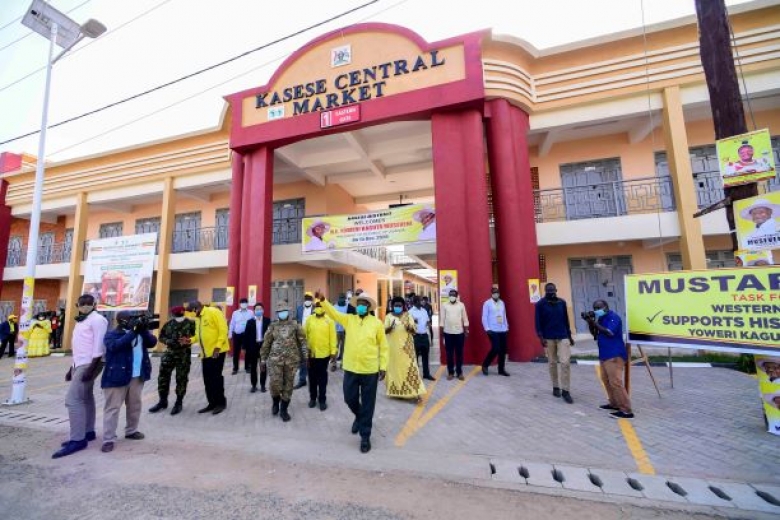 President Museveni has commissioned the 58km Ishaka- Katunguru road in Rubirizi district. The Shs 118 billion rehabilitated road is fully funded by the government of Uganda, under the Uganda National development and Maintenance Programme (NRDMP).

The road situated in western Uganda connects Bushenyi to Kasese district and runs from Ishaka Municipality through Rubirizi district to Katunguru town at Kazinga channel in Kasese district. It will be a major tourism booster as it provides a link to Queen Elizabeth National Park, a tourist attraction in the southern part of the country.

In his remarks at the commissioning ceremony at Katunguru Seed Primary School, President Museveni advised UNRA to utilize the country’s natural resources such as rocks to make better upgraded infrastructure, saying that in doing so, they must also protect the country’s resources.

“UNRA people are complaining that the soil in this area is very soft and makes it hard to construct roads. I encourage you to get stones in Karuma which you can add to harden these roads because they belong to the government,” he said.

This project started in Ishaka town before terminating at Katunguru Bridge. It connects the districts of Bushenyi and Rubirizi in Ankole sub region to Kasese in Rwenzori region.

The rehabilitation of this road was intended to improve the road condition of the existing highway through reconstruction/ rehabilitation and to foster socio-economic integration between Mbarara, Bushenyi, Rubirizi and Kasese districts with the rest of the country through facilitating the movement of people and goods. It also aimed at improving the quality of the National Road Network and connectivity to tourism sites in the countryand the neighbouring countries.

The project was 100% funded by Government of Uganda to a tune of UGX 118 billion. Road works commenced in October 2017and cumulative physical progress by end of October 2020 was 99.52%. Project is under Defects Liability Period and is now under full use by the public.

Works on 2.67 Km of Access road to West Ankole Diocese were undertaken in addition to the main project and are in progress.

Commenting on the Rukungiri- Kihihi- Ishasha/Kanungu road (78.5km) that the President had visited last evening in Rukungiri district, President Museveni directed UNRA to consider tarmacking it as it was still in a marram state.

The Minister of Works and Transport, Gen. Katumba Wamala, thanked President Museveni and the government of Uganda for bringing about social economic transformation in the district through the infrastructural development. He noted that the road network will be traversing in the districts of Mbarara, Bushenyi, Rubirizi and Kasese.

He thanked the local leaders of the district for being supportive during the implementation of the project and appealed to them to see to it that the road was maintained through cleanliness especially in the town centers.

Executive Director of UNRA, Allen Kagina said that with the rehabilitation of the road, it would now take 30 minutes for transporters to use it as opposed to three years ago when it took two hours from Ishasha to Katunguru.

On the Rukungiri-Kihihi-Ishasha/Kanungu road, Kagina said civil works progress of the project is at 31.2%. she said at Bagahwe km 15, the contractor is undertaking earthworks and that all the equipment and personnel to execut the works is on course for completion by June 2021.

For encouraging and always reminding the people to shift from subsistence to modernized farming, the chairman hailed President for this daily advice and noted that it was because of this, that there was improvement on the cash economy of the district, and country at a large.

Later, President Museveni also commissioned the Shillings 16 billion Kasese Central Modern market, in Kasese Municipality. It is one of the markets built under the Markets and Agricultural Trade Improvement Programme (MATIP-1) – a multi-million dollar project supported by the government and the African Development Bank.

The market which will accommodate about 800 vendors and will house food stalls, restaurants, banks, clinics, salons, fruit and vegetable stands, butcheries and a daycare centre. It consists of 467 stalls and 311 lockup shops.