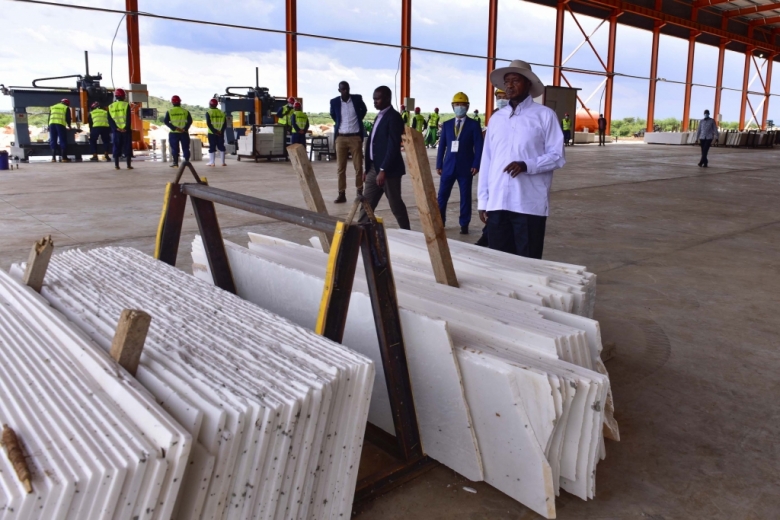 President Yoweri Museveni has hailed the people of Karamoja sub-region for supporting governments program of disarmament that has ushered in the peace now prevailing in the area followed by the industrial revolution that will not only create employment for the people but will also bring about development in the sub-region.

“I am very glad that when we advised you to remove the guns you listened and now you see what is happening. Industries are being constructed because of peace. So I thank you the people of Karamoja,” he said.

The President made the remarks  while commissioning the Sun Belt Mining Group Limited factory at Nanyidik village in Rupa sub-county-Matheniko County in Moroto district.

The plant that currently employs 120 Ugandans sits on a 3.3 squares kilometers piece of land and produces Marble floor, bathroom and kitchen tiles of all sizes. It is estimated that 560 million metric tons of marble are available in the area.

Sun Belt Mining Group has injected over US$ 13 million in the project, that forms one of the 5 factories to be constructed in Matheniko County.

President Museveni expressed his gratitude to the people of  Karamoja for voluntarily surrendering the illegal guns in their possession that has ushered in peace thus attracting investors to the area.

He noted that because of peace, the region is today witnessing a lot of development activities like the tarmacking of major roads, availability of electricity and a booming constructing sector have taken place.

“When I was coming, I was all the time turning my head left and right looking at new buildings and now factories. I was almost getting dizzy,” he said.

The President assured the people of Karamoja that government is going to bituminize the road from Moroto-Kotido-Kaabong up to the Kenya border and also the road from Kitgum-Namukora-Karenga- to Kidepo National Game Park.

Mr. Museveni further disclosed that he has held discussions with his Kenyan and Ethiopian counterparts on the possibility of constructing a road through Kenya to Ethiopia in order to access the Ethiopian market.

The President however encouraged the people of the sub-region to cooperate with the investors and noted that a lot of time and development opportunities had been lost because of insecurity. He said leaders of the time thought that cows were the only wealth available yet a lot of minerals that equally generate much wealth are available in their area.

President Museveni also paid tribute to the Chinese investors for coming to invest in Uganda assuring them of many opportunities that exist in the country.

He assured them that their concerns that include the voltage of electricity to the factory will be addressed.

On the Coronavirus, President Museveni reiterated his call to all Ugandans to strictly adhere to the rules and guidelines provided by the ministry of health and assured the nation that once the guidelines are followed the virus will definitely be defeated.

The Minister of Energy and Mineral development Hon. Mary Kitutu noted that there is a lot of mineral potential in Karamoja sub-region. She thanked President Museveni for the infrastructure in the area that has eased movement. She said adequate power would be availed to the investors in Karamoja by June 2020.

Other speakers included the LC V chairperson Moroto district Peter Ken Lochap who thanked President Museveni for the development programs the NRM government has extended to the people of Karamoja sub-region.