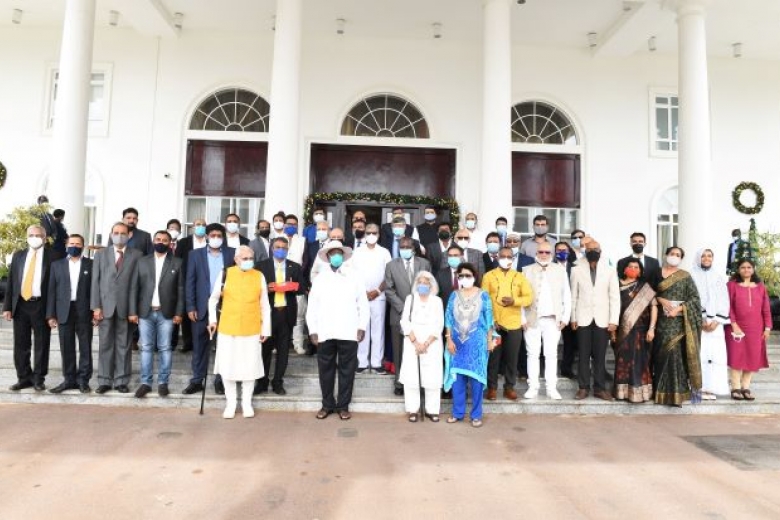 President Yoweri Museveni has commended the Indian community in Uganda for its contribution to the economic development of the country and appealed to them to encourage more people to exploit the vast investment opportunities here.

“Thank you so much for your contribution to the economic development of the country. Bring more business people for investments here. Encourage more people to come for tourism also”, he said.

The President was speaking during the International Diwali celebrations he hosted for the Indian Association and Indian community in Uganda at State House Entebbe.

The celebrations were also attended by the Minister of Finance, Planning and Economic Development Matia Kasaija, the new Uganda High Commissioner to UK Nimisha Madhvani, Mehta and his wife among others.

Diwali is an Indian festival that symbolises the spiritual victory of light over darkness among Indian community faiths in India; Hindus, Sikhs, Jain's, Muslims and some Buddhists and has been hosted in Uganda for the last six years.

Speaking to the celebrants, President Museveni congratulated the Indian community on the day of Diwali saying that it was worth being marked among the Indian race as a unifying factor in faith.

On Indians expulsion from Uganda, he noted that by historical authority he, Mr. Museveni, had a mandate to reject the mistakes of former head of State Idi Amin for the expulsion of Indians from Uganda in 1972.

“There was no legitimate reason to expel the Indians. Idi Amin’s act was rubbish. Those people did not understand the theoretical and practical mistakes made that had an element of chauvinism”, he said.

Responding to the Indians plea to be included among the local tribes in Uganda, the President said that the Indians already have a tribe popularly known as the Bahindi.

“Actually, sociologically speaking, the Indians already have a well known tribe like the known groups Bazungu, Bahalabu, Chinese except that it should be considered constitutionally. The Indians are already part of Uganda society,” he said.

He commended the Indian community for their tremendous contribution towards national economic development and prosperity.

“They are working hard for the prosperity of the country,” he said.

He said that the government will give its support come 2022 when the Indian community will be commemorating 100 years since they arrived in the country.

The Indian High Commissioner to Uganda Shri Ajay Kumar reminded the Indian community on the symbolic day saying that it should never pass unnoticed because of its significance that will bring the next Indians generations in diversity together. He wished Ugandans a Merry Christmas and a happy New year 2022.

The Chairman of the Indian Association in Uganda Mohana Rao said that the umbrella organisation of the Indians of Ugandan origin living in Uganda sensitizes all Indians to rally together with the government authorities about covid- 19 precautions, abiding by the laws and enabling environment that the government created to contain the pandemic for businesses to revive.

“We are mobilizing Indians in Uganda to get vaccinated. Make sure that the SOPs are followed in their areas of location,” he said.

He commended the NRM government for the conducive, progressive and all inclusive economic atmosphere that exists in the country at the same time reminding Indians to live peacefully, prosperously and profitably.