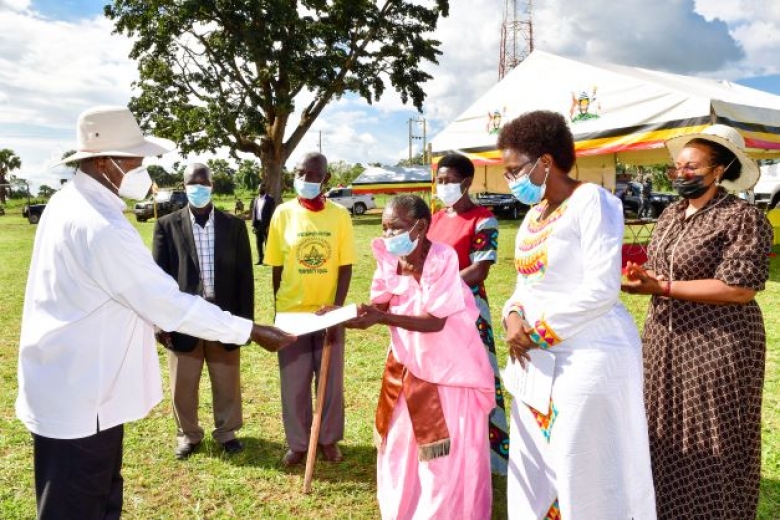 President Yoweri Kaguta Museveni has re-echoed the danger  associated with land fragmentation saying it’s part of the  hindrances to prosperity of the Ugandan people.

According to H.E the President, the culture of subdividing land  among children especially when the owner dies cannot support  commercial agriculture which is the backbone of Uganda’s  economy as children will resort to selling off the land instead of  collective investment.

The President was speaking shortly after handing over certificates  of customary land ownership to 1,537 families and communities  in Northern Uganda, West Nile and Karamoja at a ceremony that  took place at Ibuje Primary School in Apac District

“Now that you have got these titles, I want to point out to you one  danger for Uganda as a whole. When the owner dies, there is the culture of subdividing the land; physical fragmentation of land is  very dangerous for the development of the country. Because if the  land is too small and you subdivide it among the children, in future  they will have nowhere to cultivate,” citing  areas of West Nile where the average land ownership in Maracha  district is two acres

“This is the problem of West Nile now. You have heard that the  average land ownership in Maracha is two acres for both  subsistence and commercial farming. They continued with tobacco  growing of which the earnings from tobacco cannot go beyond  800,000 Uganda shillings per acre per annum. So how do you get  out of poverty?” the President noted.

According to President Museveni, both in the colonial times and  after independence, customary ownership was recognised and well  known traditionally and it would be known by everybody who owns  the land although some was owned communally especially in cattle  grazing areas.

“I congratulate the Ministry of Lands for getting out of sleep (niino  in langi) and solving this problem. Because I am sure you know  who owns what everywhere. So, why not capture it in a document?  And that’s what we have done here,” adding that  “the Government will do the survey for all the poor people in  Uganda.

He thanked the European Union (EU) for supporting the initiative  that will be rolled out to the whole country.

The activity is being implemented by the Government of Uganda  with financial support from the EU and United Nations Capital  Development Fund. Other implementing partners include Cadasta  Foundation and CEDP of the World Bank.

H.E the President said it will be easy for people with big land to do  intensive and extensive agriculture which wouldn’t be possible if  the land is fragmented into four acres and less.

“Here, I am really appealing to Ugandans when we’re making wills  to our children; this system of dividing land is a problem in future,”  He encouraged families to instead keep the  land together and give shares to their children.

“When they earn money, they share the profits accordingly,” he  said.

According to the Minister of Lands, Housing and Urban  Development, Hon. Judith Nabakooba, the certificates being  issued are mandated by law, and recognized by Government  institutions, Financial institutions and the Courts of Law and the  mapping of parcels has used both traditional and scientific  methods of demarcation.

“Even if the traditional boundary markers are uprooted or shifted,  it is easy to retrace one's boundaries because the boundary  coordinates have also been provided for each title, using SMART  technologies,” noted Hon. Nabakooba

The National Resistance Movement (NRM) Government under the  current Manifesto (2021-2026) pledged to process and give land  owners legal documentation in terms of land titles and this is the  basis for processing 4,006 customary titles for families in Greater  Northern Uganda.

More customary titles are to be processed by the Government,  targeting the registration of 275,000 families, 630 clans and  indigenous and vulnerable communities within the next two years.

“Our target shall be to reach out to land owners in 35 districts in  the country.

This is the best way to secure customary ownership rights and  thereby prevent public outcry, including stopping the abuse,  stealing or grabbing of customary land by unscrupulous  individuals, speculators and land dealers,” the Minister said.

Minister Nabakooba further informed the President that the act of  registering customary land has moved many of the beneficiaries  from the subsistence economy to the market economy where they  can now use their customary land titles to help them create wealth  and break out of poverty. “Because of this achievement, ‘Kuchi’ (peace) has returned. I am  informed that families and communities have began to engage in  producing surplus food for sale, including growing palm trees, soya  bean, cotton and sunflower, knowing that no one will destroy their  cash crops through acts of illegal land evictions and destruction of  their investments on land,” she said.

The average acreage or land holding for families in Apac district is  4.8 acres. In Maracha it is 2 acres while in Agago it is 8 acres.

Mr Asanti Odongo, the District Chairperson Apac district,  described the exercise as the final nail in the coffin to the rampant  land conflicts resulting in death and constant court cases that  affect development as much of the land has not been put into good  use.

"Your Excellency, Sir, research has shown that most of our  magistrate courts within the region are occupied by land related  cases. This, therefore, has made our communities poor and non  productive," Chairman Odongo said.  He, however, cautioned land committees to desist from issuing  certificates for land in swamps.

Ms. Caroline Adriansen, the EU Head of Cooperation and  Development reiterated commitment of EU to provide resources  amounting to £8 million to scale up this initiative to benefit  Ugandans.

"The European Union will continue to support the Government of  Uganda in scaling up this project to most of the Northern and  Eastern region where customary land tenure is dominant to  further support customary land governance," Ms. Adriansen said.

At the same function, President Museveni congratulated the people  of Lango for taking oalm oil growing seriously, joining those of  Kalangala, Rakai, Bundibugyo and Mayuge, saying they are going  to help Uganda solve the problem of lack of soap.

The President also touched on irrigation, saying the Government  has a plan to introduce irrigation in the whole country and protect  all the swamps as water catchment areas.

“We are going to encourage everyone in Uganda to preserve the  wetlands and take water from the wetlands to the land. That’s what  we are going to do in the whole of Uganda. We must end this  business of hunger by providing water for irrigation so that we can  grow crops all year round and reliably. We are going to intensify  that,” H.E the President said.

He also promised to handle the issue of poor roads in the region.

The 1995 Constitution under Article 237(1) & (3) provides that land  in Uganda belongs to the citizens of Uganda and shall be held  under four tenure systems which include; Customary, Freehold,  Mailo and Leasehold.

The Constitution further provides under Article 237(4)(a) that all  Ugandan citizens owning land under customary tenure may  acquire a certificate of ownership in a manner prescribed by  Parliament. This manner was prescribed by Parliament in 1998  under the Land Act and the procedures for implementation were  laid down in the 2004 Land Regulations.