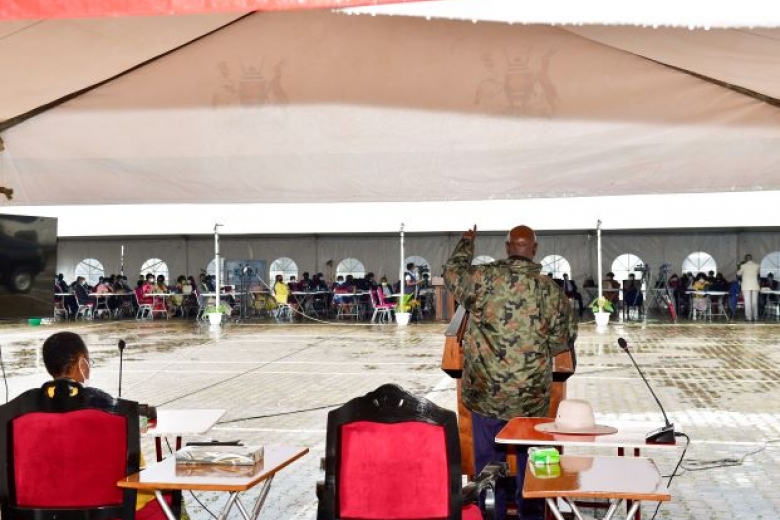 President Yoweri Museveni has issued strict guidelines for members of Cabinet to follow and implement that will expeditiously steer the nation into a middle income country.

“After the Corona I want our economy to grow very fast to 7 or 8 % converting Uganda to a middle income country,” he said.

The President who was flanked by the First Lady and Minister of Education and Sports Janet Kataha Museveni was this afternoon closing a 2 day Cabinet retreat held at Kololo ceremonial grounds in Kampala.

The induction retreat was organized by the new Cabinet Secretary and Head of Public Service Ms. Lucy Nakyobe Mbonye.

A 2 minutes silence was observed for the 2 freedom fighters who passed away today, one of them, a mother to Major General Samuel Waswa of Bukomero.

President Museveni who praised Ms. Lucy Nakyobe Mbonye for organizing the retreat and spelt out 6 targets to be adhered to by members of the Cabinet.

The President reiterated his call to all the people of Uganda to continue adhering to his guidelines and those of the Ministry of Health on how to fight COVID-19 as signs now show that the methods adopted are working.

He was glad to learn that the positivity has now dropped from 21 % to only 2.8% and added that the remaining method is that of vaccination beginning with target groups of teachers and workers at schools who number 500,000.

He said others include those of 50 years and above and those below 50 years but have underlying health issues. He said by December, the target of 7 million people will have been vaccinated and schools can reopen in January

“I want to clarify that when we are talking to the public, we are talking of things that are based on scientific analysis. We don’t want to gamble with people’s lives,” he said

The first guideline is to zero tolerance to corruption by neither asking nor accepting any bribe from anybody or even a favor especially from investors.

The President implored political leaders as well as Members of Parliament especially those on committees and civil servants to shun the vice.

“This culture must stop. It will kill the future of our country and scare away investors. If you don’t stop this will slow down the growth of our economy,” he noted.

President Museveni advised them to immediately report to the IGG in case anybody approaches them with an inducement as a favor or bribe.

He told the retreat that on coming out from the bush many people from his home area wanted to give him 2,000 heads of cattle in appreciation for liberating the country. He said he refused the offer and sent the animals to the government farm in Ngoma that are now donated to the poor.

On the issue of justice, the President pointed out murder and village theft that can affect the growth of the economy and asked judiciary to address that issue firmly.

“The Judicial system must come up and side with the people,” he stressed.

On the Parish Development Model President Museveni strongly urged Ministers to implement the program as all citizens will be converted into the money economy and it will be a turning point for the better.

The President noted that once the Parish Development Model takes root, markets will be needed for the products and this will urgently call for regional integration. He urged members of the committee concerned to ensure the fast tracking of the program.

On tax collection Mr. Museveni noted that a lot of mistakes have been made citing borrowing from outside countries, adding that if the tax collection is at 20% no borrowing would be required.

“Out of the Shs 45 trillion revenue collected, the 16 trillion is for paying off debts and the problem with borrowed money is the interest that accrues. If we collect 20% there will be no need to borrow. We should minimize borrowing,” he said.

President Museveni assured the nation of security adding that nobody will disturb the peace of Uganda unconstitutionally. He said those who will try are only wasting their time.

President Museveni told the Cabinet of the need to lower electricity tariffs to US$ cents 5 that will attract many investors who are very willing to come and open up factories in Uganda. He disclosed that during his recent visit to the United Arab Emirates many potential investors expressed their interest to come and do business in Uganda.

He said with these guidelines the economy of Uganda will gallop. Once it gallops we shall then handle the issue of jobs and the market in Uganda, regionally and internationally.