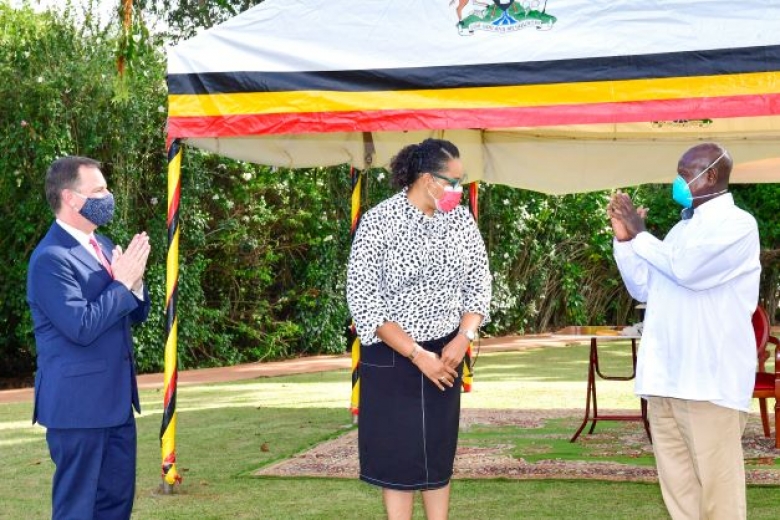 President Yoweri Museveni has received a special message from the President of the United States of America Joe Biden congratulating him upon Ugandas’ 59th Independence Anniversary due to be celebrated on Saturday the 9th October 2021.

Uganda will celebrate its 59th Independence Anniversary under the theme “Celebrating our 59th Independence Day as we secure our future through National mindset Change”. The scientific celebration will be held at Kololo ceremonial Grounds.

The message was delivered to President Museveni  by the USA Ambassador to Uganda H.E. Natalie Brown at State House Entebbe.

The President and the US Ambassador who was accompanied by the Deputy Chief of Mission at the United States Embassy in Kampala Mr. Christopher Krafft also discussed bilateral and regional issues.

President Museveni thanked the Ambassador for the message and also commended the Government of the United States for the contribution of COVID-19 vaccines sent to Uganda.

The United States delivered 1,674,270 doses of the Pfizer COVID-19 vaccine to Uganda on September 20. These combined with the September 6 delivery of 647,080 Moderna doses, the United States has donated a total of 2,321,350 COVID-19 vaccine doses to Uganda. This tranche of 1,674,270 vaccines is part of the 500 million Pfizer doses the United States delivered to 92 countries worldwide, including Uganda, to fulfill President Joe Biden’s commitment to provide safe and effective vaccines around the world and supercharge the global fight against the pandemic.

The Minister of State for Foreign Affairs Hon. Henry Okello Oreym and the  Permanent Secretary Mr. Waiswa Bagiire Vincent among others attended the meeting.