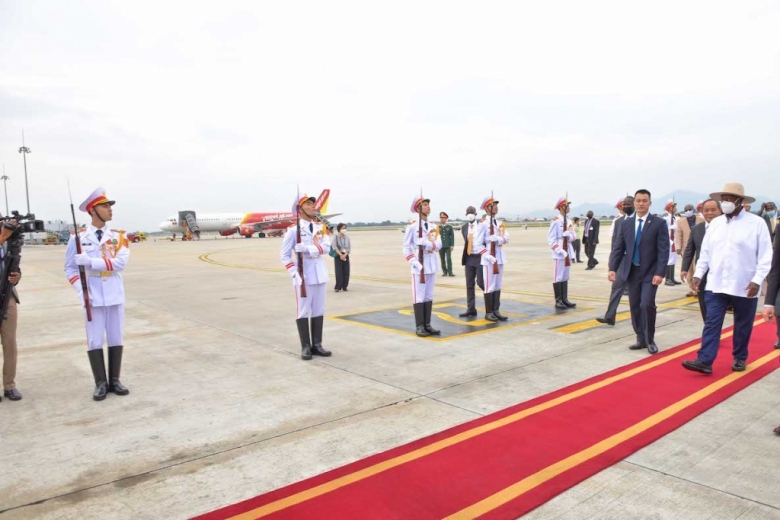 President Yoweri Kaguta Museveni ia in the Socialist Republic of Vietnam for a three-day state visit at the invitation of his counterpart President Nguyễn Xuân Phúc.

At Noi Bai International Airport in Hanoi, the capital of Vietnam, H.E Museveni was received by the Chairman Office of the President Le Khanh Hai, the Minister of State for Foreign Affairs of Vietnam Ambassador Nguyen Minh Hang, The Director General in Charge of Middle East and Africa Mr Bui Ha Nam and Chief of State Protocol Nguyen Viet Dzung.

Others were; Uganda's Permanent Representative to the United Nations Adoniya Ayebare, Mr. King Caesar Mulenga, the Honorary Consul of Socialist Republic of Vietnam to Uganda, The Vietnamese Ambassador designate to Uganda and Hon Betty Bigombe, the Ambassador (designate) to Asian Pacific Countries

While in Vietnam Gen Museveni is expected to among other engagements hold bilateral talks with the host President at the Presidential Palace, witness the signing of Agreements and different Memorandum of Understandings (MOUs) between the two governments.

Gen Museveni will also pay a courtesy calls on the Prime Minister of Vietnam Pham Minh Chinh and the Vietnam Communist Party General Secretary Nguyen Phu Trong at Office of the Central Committee of the Communist Party of Viet Nam.

Later in the week, the Ugandan President will officiate at the opening of the much anticipated Viet Nam-Uganda Business Summit and Trade Exhibition at Viet Nam National Convention Center (NCC) - Hanoi on the theme: Unlocking Investment Opportunities and later meet the Ugandan community in Vietnam.

The first-ever trade event between the two countries and the summit will provide a unique platform to accelerate Uganda-Viet Nam trade and bilateral relationships.

Gen Museveni will also lay a wreath at the President Ho Chi Minh Mausoleum, which is the final resting place of “Uncle Ho,” the beloved founder of the Democratic Socialist Republic of Vietnam.

President Ho Chi Minh is regarded highly in Vietnam as having been the great master of the Vietnamese revolution, an eminent soldier, a brilliant activist of the international communist and national liberation movements.

The Government of the Republic of Uganda and the Socialist Republic of Viet Nam have enjoyed almost 50 years of bilateral cooperation since 1973.

This relationship was revitalised in 2017 with the appointment of the first Honorary Consul of Vietnam in Uganda which presents a great opportunity to promote trade, investment opportunities and tourism in the country.