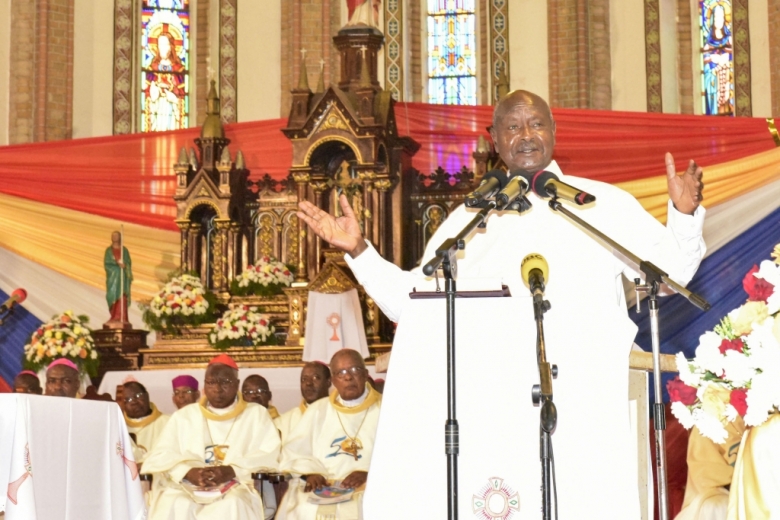 President Yoweri Museveni has urged Christian and Muslim leaders on the African continent to engage their flocks by sensitising them about the law of economic productivity.

“Unlike countries in the western world, Africa has lagged behind because it has lived in a situation of under-production and under-consumption. This has affected  both the church and government, for instance citizens do not contribute enough to the church”, he said.

The president was speaking at the celebrations to marks the Golden Jubilee of the Symposium of Episcopal Conferences of Africa and Madagascar (SECAM) held at Lubaga Cathedral in Kampala City.

SECAM was established in 1969 and inaugurated by Pope Paul VI at Lubaga Cathedral to enable African bishops manage religious work in solidarity and collegiality at the Pan-African level and promote the catholic church`s participation in education, spirituality and church family. In the same year, Pope Paul VI also honoured the Uganda martyrs.

SECAM Golden Jubilee celebrations are being held under the theme: “The Church-Family of God in Africa, Celebrate Your Jubilee! Proclaim Jesus Christ your Saviour.”

Delivering his remarks to the congregation of bishops, participants attending the 18th Assembly Plenary Assembly and Golden Jubilee of SECAM graced by ten Cardinals, President Museveni observed that Uganda is a country of blessings. “All these bishops present here have brought blessings to Uganda. They all belong to Africa.”

He however, challenged the congregation that though Africa has spiritually grown more than any other continent in the world, reinforcing Africa spiritual position should be in consonance with Africa’s people economic welfare.

“I have a good understanding especially for the Ugandan families for the last 50 years. The reason is simple, culture”, he said adding that Africans are stuck in subsistence farming. Only working for the stomach not considering the element of money and accountability and profitability.

He strongly warned that modern life is for money, economic evaluation and profitability of the economy.

Citing the biblical parable of talents in relation to God’s creation of Man in the book of Genesis, Mr. Museveni noted that God created man mainly for two purposes; to multiply and fill the earth. God also created man with a mission for man to have dominion over nature for man’s needs like controlling disaster or disease. But man has fulfilled the first mission to multiply, he said.

He therefore challenged Christians that “hare the talents that are God given multiplied” to enhance Africans economic wellbeing by sensitisation? the president questioned.

In a message from Pope, the Apostolic Nuncio to Uganda Lulgi Bionco noted that Africa is a continent that respects God, committed to strengthen the evangelisation in all aspects.

The Archbishop of Kampala Archdiocese Cyprian Lwanga thanked President Museveni and the government for the good working collaboration with the catholic church and for the support rendered to organise and hosting SECAM Golden Jubilee celebrations as an honour for Uganda.

He told the congregation that “Africans should offer to be missionaries to each other.”

SECAM President Gabriel Mbilingi, the Archbishop of Lubango in Angola noted that Africa is a continent mostly made up of young people who are the living forces of the present and the future of our countries. “This is the time for stocktaking and re-launch the journey with hope.