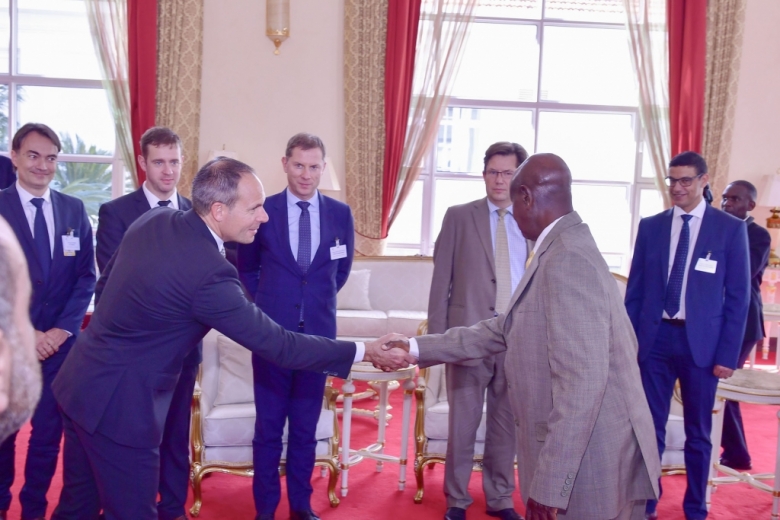 “We have got several business opportunities. Uganda is endowed with phosphates and iron ore,” he said.

The President was meeting a French Business delegation, led by the Chairman of the Confederation of French Companies, Mr. Momer Nguer, who called on him at State House, Entebbe. The delegation that was accompanied by the French Ambassador to Uganda, Mr. Jules-Armand Aniambossou, focuses mainly on the promotion of investing in Africa.

President Museveni proposed to the delegation that one of their investment groups should establish a technical institute in Uganda to provide skills that are vital in the country’s economic growth. He assured his guests that the NRM Government is targeting drastic reduction in the cost of transport through the provision of water and railway transport facilities. He also assured the delegation of the Government commitment to ensuring cheap and reliable electricity supply along with cheap money to facilitate further development of the manufacturing and agricultural sectors, among others.

Mr. Museveni suggested to the delegation to look into the potential of refining industrial sugar within Uganda noting that the move would drastically reduce the cost of consumer products, such as soft drinks, as the country currently relies on imported industrial sugar.

President Museveni used the meeting to ask the French delegation to report to him anyone who solicits for bribes from investors.

Mr. Momar Nguer, leader of the delegation, said they are keen the tap into the available business opportunities in Uganda. They expressed interest in providing fiber optic cables to every home so as to further improve Internet connections. They also indicated interest in building electricity transmission lines on top of their readiness to avail funds to local financial institutions.