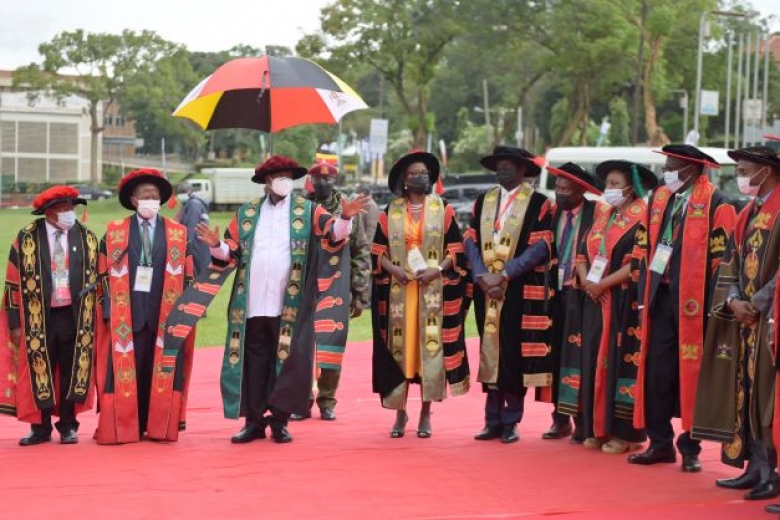 "I congratulate Makerere University, especially the science branch. The faculty of engineering, food science are doing well. The ICT dept. is also doing something , I encourage them to dig deep into what they are doing," the President said.

Gen. Museveni made the remarks during Makerere University's centennial celebrations Grand Finale which was held at the Institution's Freedom Square on Thursday 6th October, 2022.

The event was the climax of the 100 years anniversary commemoration that has been running since last year in November.

Opening its doors to only 14 students in 1922, Makerere University has grown to become one of the most prestigious Universities in Africa and the World over.

President Museveni said the primacy of socio- economic change is development of science and technology.

"When God created human beings, He said you people multiply and fill the earth. That one the Africans are doing very well but also establish dominion over nature. Remember God created man in his image," he said.

"Therefore, I congratulate the Science/Medicine faculty of Makerere University, those ones are at least in the line of God of establishing dominion over nature. Faculties of Science and Technology are also trying," the President added.

President Museveni further stated that he decided to allocate 70 percent of the Education sector's budget to science because of its progress and exceptional role in promoting social and economic change in Uganda.

"Recently, I enhanced the salaries of Science teachers and there was an uproar but now we are doing well. Science is the prima of all social changes. If we didn't live in science, we would not exist. Therefore, either you disappear or survive on mercy of others. When God is still keeping me to lead Ugandans, I will not allow that," he said.

"Science is the way to go because if we are to live in the modern world, we should deal with issues of prosperity and you cannot prosper unless you produce more goods. Look at the Japanese they don't have much resources but they are the third richest in the world. Why? Because they produce goods and we give them money and they become rich."

The Deputy Speaker of Parliament, Hon. Thomas Tayebwa commended the President and the National Resistance Movement (NRM) government for budgeting and funding the infrastructure development at Makerere university that has enabled the institution to take on many learners at the same time.

"When you go to the Western World, old students are putting their universities in their wills. So, Alumni, we should give back and I will start as an example," Hon Tayebwa said.

He also asked President Museveni to think about changing the government sponsorship scheme at public universities so that it benefits the poor not the rich who can afford to pay tuition fees for themselves.

"Why should my child benefit from a scholarship from Makerere?" he wondered.

The Chancellor of Makerere University, Prof. Ezra Suruma advised that the growth and maturity which Makerere University has attained over the 100 years of existence can serve as an example to other institutions to sustain and serve Ugandans better.

"Strong institutions are indeed a fundamental prerequisite in promoting better services in all sectors of Uganda. The quality-of-service delivery in public institutions remains a key challenge in our country. It's my sincere prayer that Makerere University will lead a way to provide quality services,” he added.

"The support from the NRM government has been pivotal and steadfast. We sincerely appreciate you for your visionary leadership. The Shs30 billion research and innovation fund from the government has sustained Makerere. Though it is not enough, it is a good start," Prof. Nawangwe asserted.

"Makerere University has managed to thrive amid diversity. Indeed no one believed that a university which started with 14 barefooted students would thrive to become one of the best universities in the world," he added.

"Makerere rose from difficult times to rise to a top university in Uganda, East Africa and World at large. The construction of our iconic building has also commenced following the approval of all the requirements by the cabinet chaired by you, Your Excellency."

"As a government we commit ourselves to support you in this endeavor. The Government contributes Shs30 billion to Makerere for research and innovation towards priority areas. Indeed, the future is bright as Makerere finds home grown solutions for the challenges faced by our country," Hon. Muyingo said as he read Hon. Janet's statement in verbatim.

The former Chancellor of Makerere University, Prof. Mondo Kagonyera praised the President for promoting the teaching of sciences in Uganda.

"We all know that everybody contributes to the development of this country but in one way of the other sciences had been neglected. We thank you for the deliberate move to support sciences. This should be supported by everybody," Prof. Kagonyera noted.

He said President Museveni's government has over the years provided research funds which has made the institution a top center of academic excellence in Uganda and the world-over.