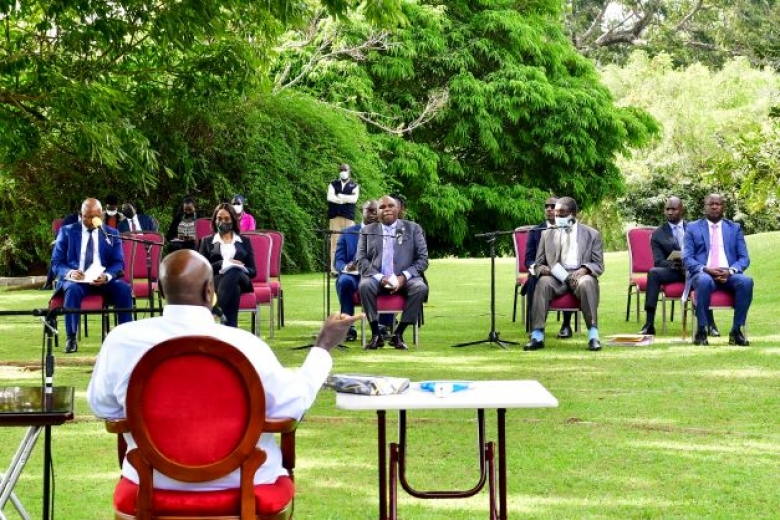 President Yoweri Museveni has met with the President and Chairman of Board of Directors of Afreximbank, Prof. Benedict Oramah.

Prof. Oramah and his group paid a courtesy call on President Museveni at State House Entebbe where they discussed a number of trade and investment opportunities in the country and the region.

His Excellency commended Prof Oramah and Afreximbank in general for choosing Uganda as their regional office as well as acknowledging their support in the country.

Prof Oramah revealed that Afreximbank is willing and considering financing of the Oil Refinery adding that the Bank views the Oil and gas as a strategic business that will uplift the African economies especially in fighting against poverty.

Over two years, the bank has provided support to the government of Uganda through the Ministry of Finance to support various trade enabling infrastructure especially roads, electricity and ports among others.

Prof Oramah noted that the Bank has approved 200 million US dollars towards the implementation of the East African Crude oil Pipeline (EACOP) as well as other Intra trade projects in the country.

African Export–Import Bank, also referred to as Afreximbank, is a pan-African multilateral trade finance institution created in 1993 under the auspices of the African Development Bank. It is headquartered in Cairo, Egypt. Afreximbank's vision is to be the trade finance bank for Africa.

The meeting was attended by Uganda’s finance Minister Matia Kasaija among other Senior officials from both Afreximbank & the finance ministry.