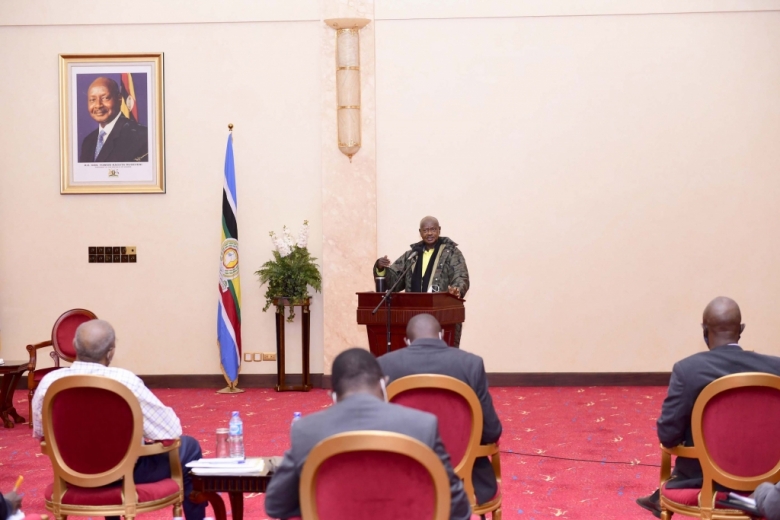 President Yoweri Kaguta Museveni also the National Chairman of the NRM party has launched the NRM Manifesto 2021 Elections Committee and urged them to draft a pro-people Manifesto. The launch of the Manifesto Committee took place at State House Entebbe and was attended among others by the Rt. Hon. Prime Minister Ruhakana Rugunda and Hon. Kasule Lumumba Justine the NRM Secretary General. The 14-member committee chaired by the Justice and Constitutional Affairs Minister Prof. Ephraim Kamuntu and deputized by the NRM deputy Secretary General, Richard Todwong, will prepare and draft the 2021 NRM Election Manifesto under the direct guidance of the National Chairperson. In addition, the committee will be guided by the ideology, philosophy and strategy of the National Resistance Movement. Speaking shortly after launching the Committee, President Yoweri Kaguta Museveni urged the committee to use the historical analysis of Uganda to enable citizens understand, where Uganda is now in terms of the relentless efforts of the NRM for the Social-Economic transformation of the Ugandan society. “You should remind the country the state of the economy by 1900 at the dawn of colonialism, 1962 at independence, the state of economy in 1986, following the 16 years of turmoil, the recovery since that time and the present state,” he said. Mr. Museveni said that where we are now, Uganda is characterized by a society with a much higher literacy rate at 75% and some waking up of the society from the pre-capitalist slumber (working for the stomach only through subsistence farming) “The limited waking up has generated huge quantities of coffee, tea, sugar, milk, bananas, beef etc. that not enough for both the internal and the regional markets. This problem must be solved,” he said. The president said the scientists are making numerous inventions that must be funded adding that this manifesto should therefore deepen value addition beyond the primary industrial products such as raw-sugar, processed milk etc. to tertiary industrial products such as casein, industrial sugar, food supplements, pharmaceutical inputs etc. “Also highlight our plans for a science led economy by our long suppressed scientists,” President Museveni advised. The prevailing peace and security in the country ushered in by the NRM, the President said, has laid a strong foundation for the private sector to thrive, adding that this enabling environment has led to accelerated and sustainable growth. However, he said there are still bottlenecks to achieving an integrated and self-sustaining economy, including the cost of money for agriculture, industry and some of the growing energy giving services sectors like tourism. The others are transport costs, cost of electricity, cost and availability of water for production among others. “The private sector is a critical player in economic growth and development of an economy and is the engine for job creation, increased production, productivity, value addition and a national revenue base of the economy,” Mr. Museveni said. This Manifesto, the President said should therefore address the export promotion and import substitution strategy in the real economy that deals with the nine basic human needs of Food, clothing, shelter, medicine, security, physical infrastructure like railways, roads, electricity, telephones etc. health infrastructure, the education infrastructure, and spiritual work. The NRM party Secretary General Hon. Kasule Lumumba Justine said that like the previous manifestos, the present one will further push forward the implementation of the four NRM principles of Patriotism, Pan-Africanism, Social Economic Transformation and democracy plus other measures. She said that the party has to present to the Ugandan people a summary of its achievements, the overall and sectoral performance of the NRM Government and its programme for the next five years. The Committee Chairperson also Justice and constitutional affairs Minister Prof. Ephraim Kamuntu in his acceptance speech on behalf of the members thanked President Museveni for the trust and confidence he has put in the committee and pledged to perform to his expectations. Prof. Kamuntu said that the committee will follow the President’s vision of transforming Uganda from being poor to a modern developed country. The National Resistance Movement will present an election Manifesto to the people of Uganda, as it has done in all previous general elections since 1996 as the basis for renewing its contract of governance with the people of Uganda.

The Government of Uganda and Total have concluded and signed the Host...