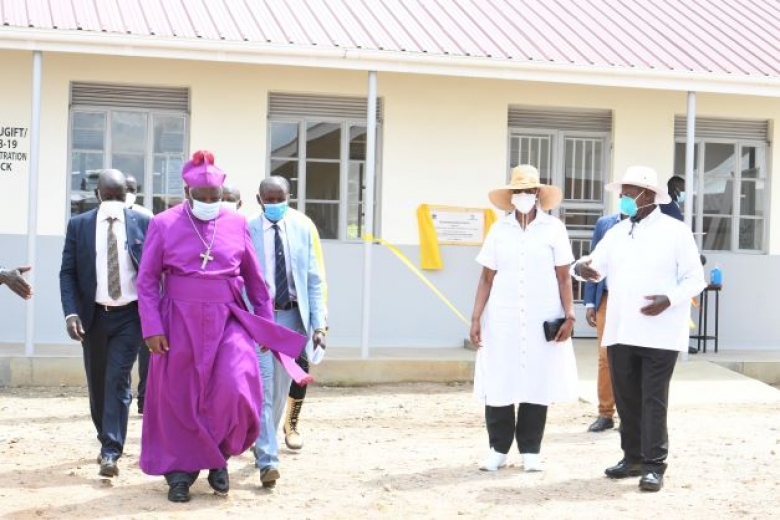 President Yoweri Museveni has commissioned Keihangara Seed Secondary School, the first of its kind in the country in Ibanda district under the fund of World Bank and Government of Uganda.

‘I came here to use the opportunity of commissioning the school as a symbol to remind Ugandans that the government is moving on the front line for mass education as opposed to elite education during colonial and past governments. I want cheaper and affordable education for everybody. This is the NRM concept of education for all”, he said.

The full package of the Uganda Inter-government Fiscal Transfers (UgIFT) Seed Secondary School provides for a multipurpose hall, three units of classroom blocks, an administration block, a fully equipped two unit Science block with science kits and chemical reagents, a library, an ICT block and a three unit teachers’ houses among others.

Speaking during the official opening ceremony of  Keihangara Seed School in Rwenshambya Village Keihangara Sub county Ibanda District, the President who was accompanied by the First Lady and the Minister of Education and Sport Hon. Janet Kataha Museveni said having access to education means that the schools must be near where people live with a concept of a secondary school per Sub county and technical college at constituency level.

He said that there had been a distortion in the education system saying that the challenge has been that out of 10.9million children at primary school level only about two million join higher level of education wondering why the rest don’t progress. He however said most of the children drop out of school because education is sold as a commodity.

The President emphasized that the government builds classrooms, laboratories, libraries for textbooks, ICT laboratories and other facilities without the support of the parents so that the children study free.

He warned Ugandans who paralyze government development programs for personal gain that they will be punished and punished.

The Minister of Education and Sports Janet Museveni assured the country that the Ministry is committed to implementing the policy of construction of government schools in every sub county.

”A new mapping exercise will be conducted to establish the extent of the gap of the administrative units that do not have a government Secondary school per sub county,” she said.

Hon. Janet Museveni said it was a pity that some of the Seed Schools being constructed lack critical amenities such as electricity and water given their hard to reach locations.

“I appeal to the Ministry of Finance, Planning and Economic development, the coordinator of the programme, to prioritize the provision of these critical services to the schools,” she said.

She reminded Ugandans that as the country prepares to reopen education institutions on January 10, 2022, people should not forget to thank God for the seed secondary schools that are being commissioned.

The Minister of State for Sports Hamson Denis Obua who was accompanied by the North West Ankole  Bishop Amos Magezi, Father Dido Nshekanimanya from the Archdiocese of Mbarara, Head Teacher Charles Natukwasa took the two principals on a tour around the structures said the construction process matched the standards.

“The structures are fully equipped and are befitting of an education institution,” he said.

The Director Basic Education in the Ministry of Education and Sports Ismail Mulindwa said the government has been in collaboration with the World Bank in implementing Uganda Inter-government Fiscal Transfers (UgIFT) program since Financial year 2018-19.

He said that the ministry is committed to constructing, equipping and staffing 259 Seed Secondary Schools country wide, in three phases over the period of five years comprising 117 schools in phase 1, 115 schools in phase two and 27 in phase three. This also includes the construction and equipping the schools with 418 laboratories.

The Ministry is also committed to complete the construction of incomplete structures in 21 Technical Schools and Polytechnics.

Ibanda district LC 5 Chairman Happy Herbert Mayanja commended the church community for donating the piece of land on which the newly built magnificent modern education facility has been constructed and expanded to accommodate science subjects laboratories that are fully fledged and equipped.

The Area MP, Ibanda South John Paul Nimusiima appealed to the parents to provide their children with an education through the Government's free universal education.