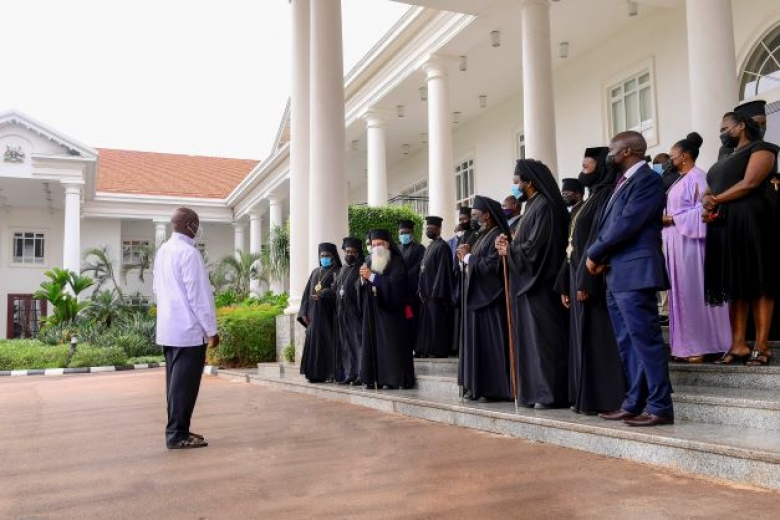 President Yoweri Kaguta Museveni has reiterated his commitment to support the developmental and humanitarian efforts of the Orthodox Church in Uganda.

The President was this afternoon meeting a 22-member delegation of Uganda Orthodox Church at State House Entebbe where he welcomed His Eminence Metropolitan Jeronymos Muzeeyi the new Archbishop of the Metropolis of Kampala.

Metropolitan Muzeeyi was recently appointed to replace the late Metropolitan Jonah Lwanga who passed away in September 2021.

Metropolitan Jeronymos was introduced by His Eminence Metropolitan Tillyrides Andreas Makarios, the Archbishop of Nairobi and Representative of the Patriarch of Alexandria who urged the President to support him as he graciously supported his predecessor the late Metropolitan Yonah Lwanga.

"Your excellency, today I have the joy on behalf of our Pope and Patriarch, to present to you the new metropolitan of Kampala and  Uganda, His Eminence Jeronymos Muzeeyi. He is an outstanding theologian and an accomplished Canonist of the Church. I am confident that with your support and that of the Orthodox fraternity of Uganda, His Eminence Jeronymos has the potential to steer his church to greater spiritual heights, " Metropolitan Makarios said.

Makarios expressed gratitude for the reception and assistance accorded to him when he was sent as the caretaker of the archdiocese of Kampala following the repose of his co-celebrant Metropolitan Jonah Lwanga and the generous hospitality during the visit of the Pope and Patriarch of Alexandria and all Africa Theodore II which ‘made us feel at home and greatly cemented further relations of the State and the Orthodox Church here in Uganda. On behalf of the Pope and Patriarch, accept our heartfelt gratitude,” he said.

On his part, the new Archbishop of the Metropolis of Kampala His Eminence Metropolitan Jeronymos Muzeeyi, thanked the President for his support to the Orthodox Church and its previous leaders and pledged to work with his government.

"As we assume the leadership of Uganda Orthodox Church, we commit to support and work with you and your government to improve the quality of life of all Ugandans and to support you in all your development programs for the betterment of our Uganda as a country. We shall continue to pray for your good health and long life so that as a country we continue to reap the fruits of your good leadership," Jeronymos Muzeeyi said.

"I am very happy to meet you and definitely we shall support you, " Museveni said.

The President promised to mobilise more resources from his Orthodox friends in countries like Russia and Egypt, to boost the on-going projects like the construction of the Uganda Orthodox Cathedral at Lubya Hill, in Rubaga Division in Kampala. In May 2019, President Museveni donated Uganda shillings 300 million towards the same project.

He also asked the Orthodox Church to identify Orthodox founded education institutions like primary schools, secondary and technical institutions especially in areas where government has no school so that they can be supported as requested by the head of development commission and head of the laity in Uganda Orthodox Church Theodore Ssekikubo.

"If the school is in an area where there’s no government school, we shall take it over to become a government school but a Church founded as a foundation body. We normally have that formula.

The meeting was also attended by His Eminence Metropolitan Innocentios Byakatonda, the Archbishop of Burundi and Rwanda, His Grace Bishop Silvestros Kisitu of the new Diocese of Jinja and His Grace Bishop Nektarios Kabuye new Bishop of Gulu among others.

The installation ceremony of the newly-elected Metropolitan of the Holy Metropolis of Kampala and All Uganda, His Eminence Archbishop Jeronymos Muzeeyi is expected to take place this Sunday February 20th 2022 at St. Nicholas Orthodox Cathedral, Namungoona, in Rubaga Division.

His Eminence Metropolitan Jeronymos Muzeeyi was born on March 18, 1962 in Bulopa, Kamuli District, Uganda into an Orthodox family of Mr. Augustinos Kakombe and Mrs Agnes Biribawa. He is the first born among the four children of the couple.