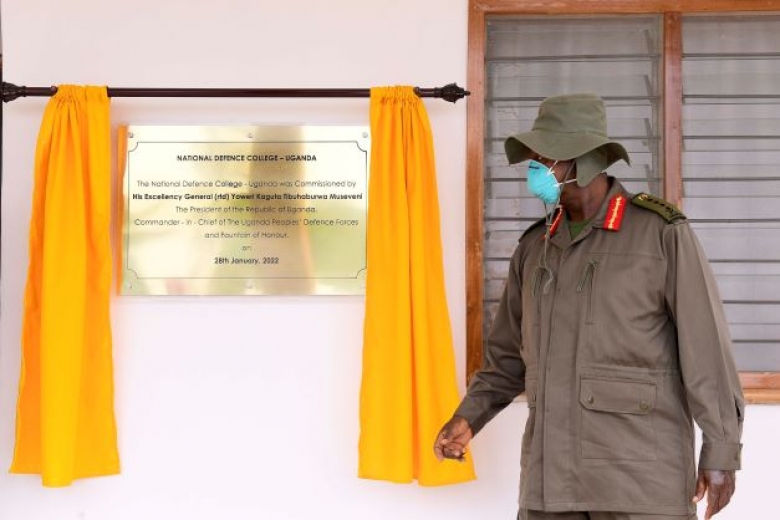 Museveni also commissioned the college governing council and opened the inaugural course 1/2022 with an enrollment of 18 participants drawn from UPDF.

Speaking at the function, Gen. Museveni described the NDC as an apex of military learning if well utilized.

"You, Army Leaders, if you understand the significance of training, you'll have a very good force which has no fear, which is friendly to the people and can achieve any mission given to them. Because training brings knowledge and dispels ignorance. There's no reason why you should fear even in the battlefield," Museveni said.

Museveni called upon the army to take training seriously because every course has got a purpose. He said whereas they might be good at fighting with weapons, they need to be backed up with administration and planning skills which the staff college has come in to solve.

"You must now have the capacity to deal with strategic defense issues affecting the whole country and the region in case there's a war; to have capacity to see the starting point of a conflict and the possible end of that conflict from A to Z," the President said

He urged officers to understand that the capacity depends on other strategic factors; the size of the economy, morale of the people, infrastructure, diplomacy, the geo- strategic situation in a given area.

"You can now command the battle by combining all the defence systems in the country. You have that capacity to lead an integrated operation - infantry, artillery, airforce, navy and so on in a coordinated way," he added.

The Chief of Defense Forces (CDF), Gen. Wilson Mbasu Mbadi, said the college will help the country save a lot of money that the Force has been injecting in to facilitate its officers for training abroad in countries like South Africa, Kenya, Tanzania, Egypt, the US and the UK.

This means on training in Kenya, we will be saving $54,000 and $40,000 on training in Tanzania," Mbadi said, adding that it will also help deal with the backlog of officers that are supposed to have attended the course but couldn't do so because of budgetary constraints.

According to the College Commandant, Maj. Gen. Francis Okello, the College's two-year academic program has been condensed in 48 weeks (11 months), at the end of which participants will be awarded post- graduate diplomas. Participants who meet the criteria for joining the Masters program at the University will undertake an academic program leading to the award of Degree of Master of Security Strategy of Makerere University.

"Your Excellency, I wish to report that the NDC has successfully completed the affiliation process to Makerere University. The National Council of Higher Education (NCHE), too, is in the final stages of accrediting the program of the college. These two processes grant us international recognition," Maj Gen. Okello said.

The College is the first of its kind in Uganda and is anticipated to attract senior officers up to the level of a one-star general, senior officers at the rank of Colonel and also civilians in future.

The ceremony was attended by, among others, the Minister of Defense and Veteran Affairs, Hon. Vincent Bamulangaki Ssempijja, the Minister of State for Higher Education, Hon. John Muyingo; Defense attaches from Rwanda, Burundi, Tanzania, Kenya and South Sudan; army officers and district leaders of Buikwe.