Meeting with leaders of Bunyoro sub-region 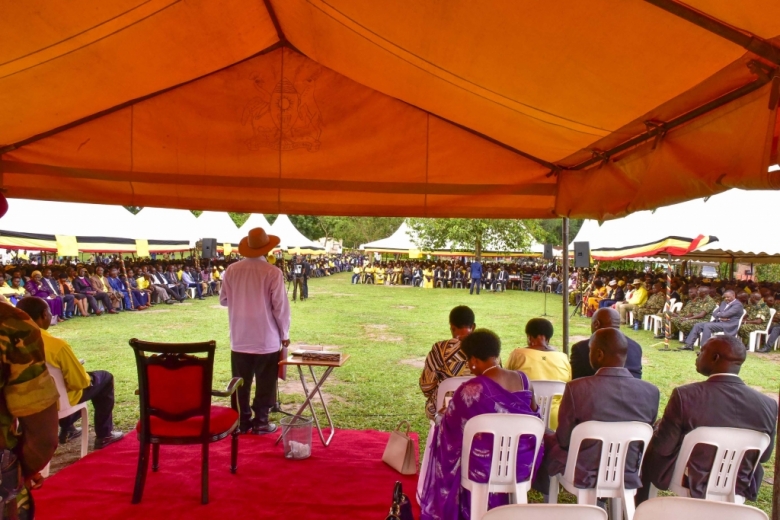 Tuesday, May 14, 2019
Today, I met with leaders of Bunyoro sub-region under my current wealth creation drive that I launched last week in Tooro. We had a lively, interactive meeting at Kontik Hotel in Hoima town and thank the political and technical leaders for coming.
When the NRM came to power, a lot had gone wrong. We had to start on a minimum recovery package. We have since moved in leaps and bounds, including strengthening our democracy. There is so much freedom now to the point that people insult the President freely on radios and social media.
I want Ugandans to understand that our limited resources means we cannot do everything at once. We must prioritize, handling the most pressing issues first, which we have done with electricity, roads, security, schools, hospitals among others.
We have developed but must now do more for wealth creation. The four major sectors to create wealth and jobs are commercial agriculture, industrialization, services and ICT. Leaders must help the population zero on which of these sectors best suits them.
Just like I have done elsewhere, I am going to put up a model farm in Bunyoro sub-region to show people that small scale commercial agriculture is possible, and they should pick a leaf to help themselves out of poverty.
The leaders should conduct surveys in their communities to determine the number of people still living below the poverty line and ways in which we can support them.
Let us also discourage land fragmentation, protect the environment, especially wetlands and forests, to minimize effects of climate change. We shall also set up an industrial park for small scale industries in Bunyoro to create jobs.