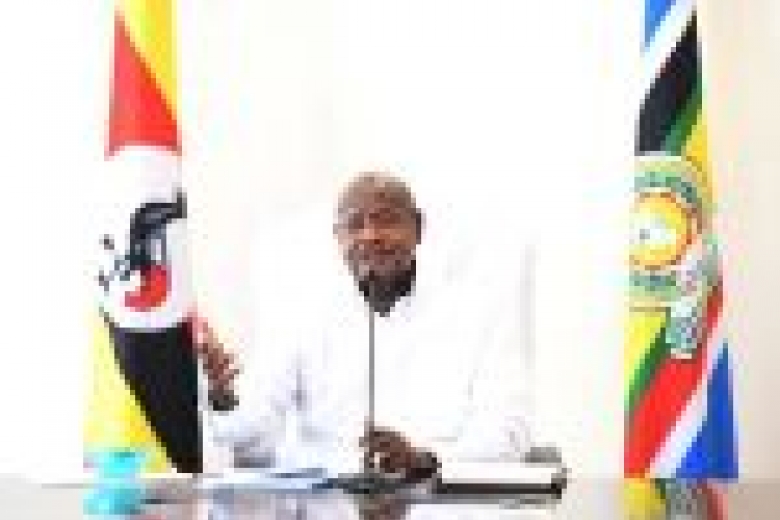 President Yoweri Museveni has stressed Uganda’s commitment to ensure the implementation of East African Integration and that of Africa to create a big market for the produce that will in turn lead to the prosperity of the people.

“Uganda will never be found wanting in the effort of African liberation or integration,” he said.

This is the first EAC summit to be held virtually because of the COVID-19 pandemic.

President Museveni said he was happy to see some progress made by East African leaders towards achieving this goal of integration and informed the summit that he had been involved in the struggle for the liberation of Africa for the last 60 years. He added that the need for integration is driven by the urge to get a bigger market that will absorb products being produced by farmers that are beginning to wake up to embrace commercial farming.

The President noted that in Uganda farmers who were engrossed in subsistence agriculture have now realized the need to go commercial and the production of various products that include sugar, maize and bananas is now in surplus.

He paid tribute to the Late President of Kenya Daniel Arap Moi and that of Tanzania Ali Hassan Mwinyi for helping him  revive the East African Community.

“One solution to the market is the regional market of East Africa,” he asserted.

President Museveni added that integration is also necessary for countering security threats in the region citing some elements who are ravaging some parts of the countries in the neighborhood.

The President further explained that the need for integration is for fraternity because the people who are trying to unite are linked in many ways like culture and share the same language like Kiswahili.

President Museveni congratulated the new chairperson of the East African Community Uhuru Kenyatta for taking over the mantle and thanked the out going Chairperson President Paul Kagame for his contribution to the Community.

The President also commended the out going Secretary General of EAC Liberat Mfumukeko for his hard work and welcomed the new Secretary General Dr. Peter Mathuki for having been approved by the summit for the new post.

President Uhuru Kenyatta thanked the summit leaders for their trust in him to chair the EAC and  pledged his commitment to realize the success of the integration process for the benefit of the people of East Africa.

He also promised to promote tourism in the region as well as ensure peace and security.

The outgoing chairman of the community President Paul Kagame thanked member countries for the support accorded to him during his tenure of duty.

In the communiqué the East African leaders among other things directed the Council of Ministers to expedite the verification of the application by DRC to join the community.

The summit also did see the swearing in of judges to the East African Court of Justice.