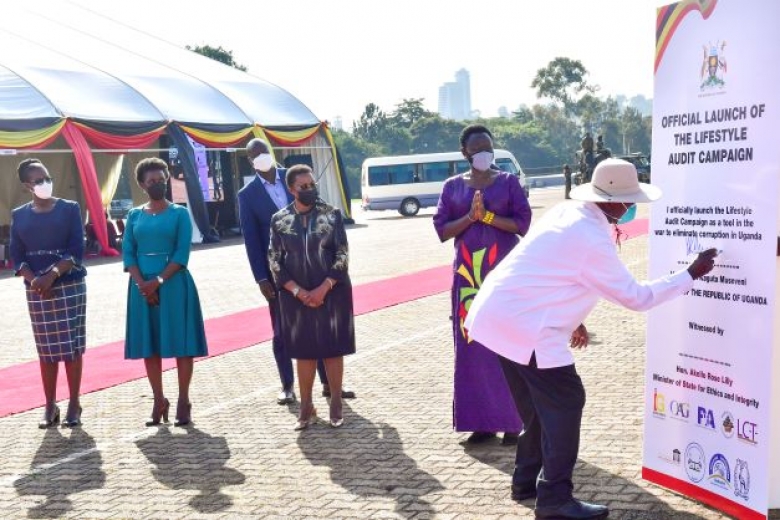 "The sectors of wealth are there and well known; agriculture, services, manufacturing etc, so that people get the culture of starting small and belonging," he said.

The president was speaking at Kololo Ceremonial Grounds as Uganda joined the rest of the world to mark the International Anti-Corruption Day held on the theme: "Promoting Active Citizen Participation in the social accountability"

The president said the National Resistance Movement-NRM from the onset, was very clear about the problem of corruption and put in place measures to fight it part of which, is the democratization process that gave people the mandate to elect leaders they trust despite the presence of those appointed by government like sub county/Gombolola Chiefs.

"I did this because I knew what was happening in the colonial times. I wanted the people to have their own voice. I want to know why the LC.3 chairperson who is elected by the people would have things going wrong in his area and he just keeps quiet", Museveni said.

At the same event Museveni launched the National Lifestyle Audit Campaign as a tool in the war to eliminate corruption in Uganda. The president however cautioned the Inspector General of Government (IGG), Ms Beti Kamya to be careful while executing the campaign as thieves might be prompted to invest the loot outside Uganda. He called upon the IGG to focus on performance and results oriented audit of the money meant for government projects.

"This method of working with the victims has worked for the NRA. The NRA became very popular with the people because of this method", he said

Referring to the Inspectorate of Government report of 2019/2021, The Inspector General of Government Betty Kamya, said her office has 5000 active cases of corruption reported by whistleblowers valued at about 500 billion shillings including investigations on locust money (UGX.24B), Covid-19 money (UGX.59B), Innovation Fund for the former Ministry of Science and Technology (UGX.78B), renovation of Entebbe Airport (UGX.17B), SAGE money involving ghost elderly people (UGX.49.6B), Ministry of Agriculture (UGX. 9B) among others. She said the cases are at different levels of completion between investigation, prosecution and appeals in courts of law.

Beti Kamya said the Lifestyle Audit Campaign, will help catch what she termed as the BIG FISH who are said to be slippery, posing a challenge to those prosecuting them in courts that require evidence beyond reasonable doubt.

"We may fail to prove in court that you took money through corrupt means but through the Lifestyle Audit Method, the onus is on the suspect to prove beyond reasonable doubt to the judge that the wealth s/he acquired while in public office which is not commensurate with his/her known income is legit", Kamya said.

The Minister of State for Ethics and Integrity Hon. Akello Rose Lilly thanked the First Lady Janet Kataha Museveni who is the Champion of Ambassadors for integrity for commissioning the integrity focal persons and a national steering committee led by Bishop Joshua Lwere.