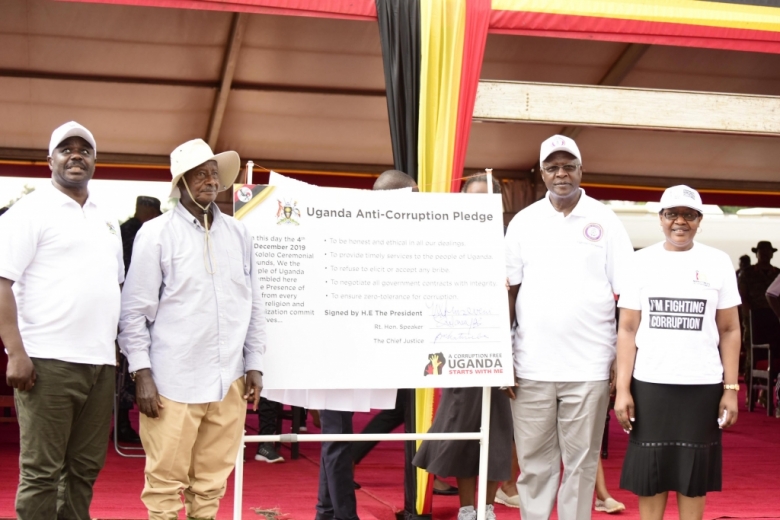 President Yoweri Museveni has called on leaders, especially the political, administrative and those in the judiciary, to support the expansion of the 4 sectors that create wealth to help the people get out of material needs which is one of the main causes of corruption.

“The 4 sectors are commercial agriculture, industries, services and ICT because if people don’t have jobs or don’t have income, the temptation is high. Therefore, it is not correct, especially for the leaders, to speak in terms of morality and spirituality and not talk of the socio-economic side of people’s problems,” he said.

The President made the comments today after the Anti-Corruption Walk that was organized by the Anti-Corruption Unit in State House, which is headed by Lt. Col. Edith Nakalema. The ceremony took place at Kololo Independence ceremonial grounds in Kampala and ran under the theme “A corrupt Free Uganda Begins With Me.’

President Museveni pointed out that corruption is both a moral and spiritual problem adding that the vice becomes a moral problem because one becomes a parasite.

“Corrupt people are parasites because they get wealth which they did not earn,” he said.

He described perpetrators of corruption as bad investors who think that the bad things they do that people do not see, are also not seen by God. Mr. Museveni, who said he was a clean person who has never stolen or received any bribe as he is a wealthy person. He further noted that he has never, for the last 60 years, seen any corrupt person being successful sustainably.

Mr. Museveni told the huge gathering that the laws to fight the vice are in place adding that the only loophole was lack of implementation, supervision, follow up as well as thorough investigation of most cases.

Regarding supervision, the President singled out the Police that at times alters the language used in statements that can attract lighter charges to the criminal.

He also urged the three organs of government – the Uganda Revenue Authority, IGG and the Anti-Corruption Unit – to recruit their staff on the basis of integrity not papers.

“The mistake of IGG, URA and ACU is to recruit people using papers. Look for people with integrity. They are there in Uganda so that we can have a safe zone that is free of corruption,” he said.

President Museveni encouraged everybody to always have exercises for physical fitness that will also chase away some ailments from the body.

Chief Justice, Bart Katureebe, urged members of the Judiciary to embrace the theme of the occasion - ‘A Corrupt Free Uganda Begins with Me’. He assured the nation of the commitment by the Judiciary to see to it that no injustices are committed in the execution of their duties.

Deputy Speaker, Jacob Oulanyah, noted that fighting corruption begins from an individual and called on all Ugandans to develop a change of attitude and shun the vice. He assured the nation of the commitment by Parliament to perform its duties with integrity.

Ethics and Integrity Minister, Fr. Simon Lokodo thanked President Museveni for the Government’s Anti-Corruption Agencies noting that they have done a lot in the fight against the vice.