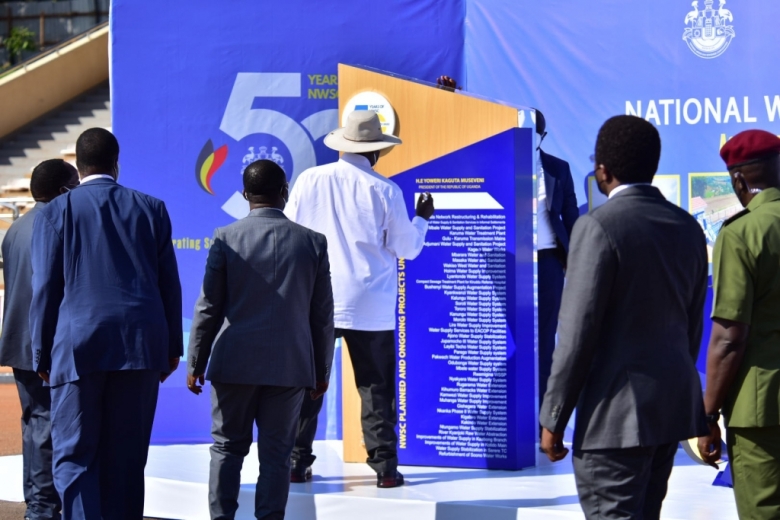 President Yoweri Kaguta Museveni continued to issue a stern warning to wetland encroachers to get out peacefully if Uganda is to have reliable rainfalls to facilitate human and industrial development and irrigation schemes to boost agriculture.

The President termed as “wrong, dangerous and unnecessary” for people to interfere with the water bodies such as the lake showers, river banks, swamps (granaries of water) for farming and other activities that not only contaminate but also drain water bodies.

“And therefore, where water is please, do not go there. And if you’re there please, get yourself out slowly so that we don’t have to come and push you out of the water bodies. We want the water to be kept so that it can be used for the four (4) purposes of drinking, sewerage, industrial use and irrigation,” H.E Museveni said.

Gen Museveni made the remarks at Kololo Independence grounds on Friday as National Water & Sewerage Corporation celebrated 50 years of passionate and dedicated service to the people of Uganda on the theme: Accelerating Sustainable Water and Sanitation for All; For Health and Wealth.

The President added that the government will soon be announcing a clear plan to deal with encroachers once and for all in order to preserve the wetlands, protect the integrity of the fragile ecosystems and keep the water clean. He asked the authorities in areas where people encroach on water bodies to act on the degraders before it’s too late.

“Why should this happen when there's government everywhere? So, please I warn all those leaders, why do they allow all this to happen under their care?” Gen Museveni warned.

He said due to the unreliable rains, the government is going to put more emphasis on upscaling irrigation schemes to avoid food insecurity.

The President congratulated National Water and Sewerage Corporation upon marking 50 years of service and for partially developing its capacity, saying economies of Africa like Uganda are characterized as underdeveloped, meaning they have got a lot of potential which it has not developed which the water body has started doing. The corporation is on top of fulfilling its core functions of providing safe and clean water to the people and to deal with sewerage, they have been able to make a total of 109 billion shillings as profits annually.

“Thank you for proving that government companies can make money,” H.E Museveni said, adding that one of the reasons for privatization was that the government had given up on its own companies because of their inefficiencies at that time.

“We had said government companies are thieves (babbi in Luganda), let's rely on the private sector but we have seen here that some are not. So, I congratulate you for passing the test,” he added.

He was happy to learn that the water body has extended clean water to 18 million Ugandans in 263 towns which never had water.

“In 1979, I was part of the government that replaced Idi Amin and the house we stayed in around prince Charles drive. For the two years I was there we never had piped water in the house. But now most of these places have water,” H.E Museveni said.

He further noted that for Uganda to produce cheaply and trade competitively in markets, the government is going to improve the railway network, electricity, irrigation and the cost of money in the banks like Uganda Development Bank (UDB) for industrial development.

The managing Director National Water and Sewerage Corporation Eng Dr Silver Mugisha thanked the president for the support given to National Water.

“When you gave us money for the 100 percent service coverage acceleration program, that is when we were able to jump from 13,000 kilometers to 21,000 kilometers of water coverage,” Eng Mugisha said.

He asked the government to support their homegrown technology solutions that are based on self-help approach more than expensive imported technologies, adding that the National IT Policy should promote integration, rather than discouraging development of individual entity initiatives.

Dr Mugisha however said, despite using smart meter technologies (Prepaid Meters) for low-income neighborhoods in Kampala and selected government institutions especially Defense, Police and Uganda Prisons, they have not done much despite their efficiency due to inadequate budgeting of government institutions.

“As an institution, we cannot afford to disconnect Defense, we cannot disconnect Police and Prisons on the account that they have not been given sufficient budgets to pay for water bills,” Dr Mugisha said.

The board chairman of National Water and Sewerage Corporation Eng Dr Badru Kiggundu, said their target is now to cover all the industrial parks to encourage manufacturing.

The Minister of Water and Environment Hon Sam Cheptoris described the day as a memorable one which he will never forget in his lifetime.

A total of seventy-five (5) completed projects focused on improving water supply and extending supply to new areas were inaugurated.