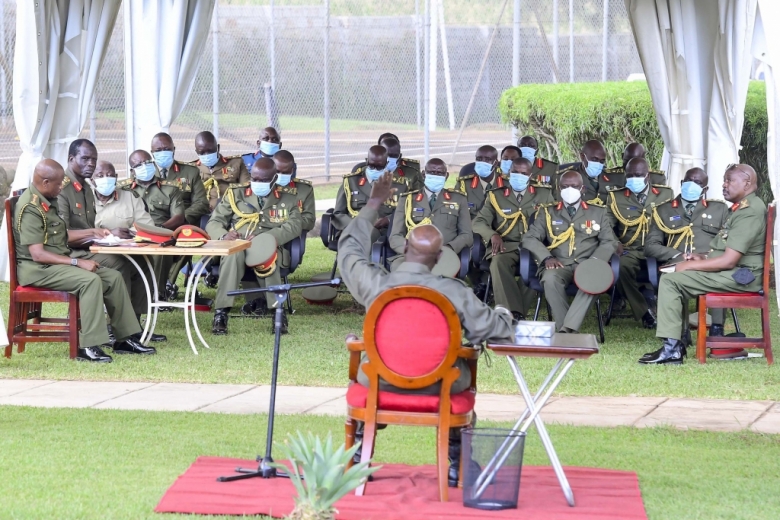 H.E the President of the Republic of Uganda who doubles as the Commander in Chief (C-I-C) of the Uganda People's Defense Forces (UPDF), H.E Yoweri Kaguta Museveni has advised UPDF officers to fight corruption if they don't want to be enemies of the army and Uganda at large.

“Senior army officers should make sure that corruption which has been a problem in the civilian sector does not penetrate the armed forces”.

Gen. Museveni made the remarks during the maiden graduation ceremony of the National Defence College- Uganda (NDC-U) in Buikwe District.

A total of 18 senior UPDF officers graduated in a postgraduate course of Security and Strategic Studies. The course lasted for one (1) year having opened in January 2022.

He also urged the senior officers to train people under their command, pointing it out as a crucial area as far as capacity building is concerned.

“Train the people under your command because the army is first and foremost for fighting. Everybody in the army must be a fighter and a leader of fighters or support the fighter. We don't want half- baked people anywhere. Training makes people brave. If I'm confident of my weapons, my skills, there's nothing that I will fear.  And another thing, always check on the welfare of your soldiers to ensure that they have what they need,” he said.

President Museveni further disclosed that dependency on western powers is among the key factors causing chaos and insecurity in most African countries.

“Security of each country must be provided by its own people not by all these groups running around because the people are the ones who know what hurts them. If you are a good friend, you should always insist on self-sufficiency in security not dependency. That is why Uganda is peaceful and I would like to really advise other Third-World people to stop dependency because there's nobody who can know more than you how you can defend yourself. It is a big mistake. You may not have all the resources but the concept should be there and you have the nucleus,” he emphasized.

He also noted that for a country to be peaceful, it needs to have a national army with capable leadership.

“Now part of the instability which Uganda had after Independence was due to that problem of having no capable army leaders. A fellow like Idi Amin didn't know anything. He was totally ignorant. So, they didn't know the idea of loyalty to the Constitution; then they could not understand anything about running a country even when they took power. So that was part of the problem. Therefore, right from our student days, we resolved that we must build an army of a new type and that is what we started doing. And when we were in Government, we developed capacity for the support arms by working with a number of other people initially Tanzanians, North Koreans and Russians,” the President asserted.

“This college, therefore, is an apex training centre where we shall be training our senior people mainly from the army but also from other sectors because here as a National Defence College, you are training people to be conversant with the National defence and security wholistically and strategically for the whole country. Not just the army but also other sectors like the economy, politics that make the army strong. Therefore, what we have achieved here is a result of our long journey of consciously building our capacity as Uganda,” he added.

The UPDF Chief of Defence Forces, Gen. Wilson Mbadi, also congratulated the course participants for having successfully completed this course, saying that, “Even a journey of a thousand miles begins with a single step”.

Gen. Mbadi also reiterated that the college comes now to cap the most top tier of the joint military education requirements with added advantages such as reduced cost of training outside the country, the ability to impart Uganda's own historical experiences in the officers' historic and strategic thinking and developing capacity to improve the force's human resource.

“Your Excellency, we have now learnt to make our own strategic thought fishing nets. Thus, we don't need to ask for fish daily from somewhere else; we are our own strategic thought fishermen now. However, this does not mean that the journey is over. This college now offers to us salient opportunities like ensuring the true homing of the college and securing the environment. This means expansion of the infrastructure and also numbers of people training here. It will also give us the opportunity of pushing for additional programs for the college. It also gives us opportunity to enhance defence diplomacy especially when we shall be having students from the region or even from outside the region coming to attend this course,” he said.

“It also gives us an opportunity of benchmarking to transform from National Defence College to National Defence University, the way others in other countries have successfully done it to make their colleges degree awarding institutions and semi-autonomous to ensure uninterrupted funding.”

The NDC-U Commandant, Maj. Gen. Francis Okello, said the college's mandate is to prepare selected senior military officers, Government officials and individuals from the private sector in Uganda and elsewhere for senior leadership and management roles.

“This is done by developing strategic understanding and the capacity for strategic thinking through rigorous analysis of the international security agenda that provides for security, stability, prosperity and the key tenets of leadership at the national strategic level. The NDC course, Your Excellency, is pegged at postgraduate level and the aim is to produce graduates who are able to work intuitively across the national, cultural and ideological boundaries to lead or contribute to developing strategies at the highest level,” Gen. Okello said.

Gen. Okello added that the 18 officers are also undertaking a Master’s Degree in Security Strategy course of Makerere University which they will complete in 2024.

“Before you, Your Excellency, are 18 Senior UPDF officers, nine Brigadiers and nine Colonels, two among them are lady officers. They have completed their one-year course on National Security and Strategic Studies and the studies covered areas on national security, policy formulation, implementation and review, strategic management and research. The studies were anchored on a Pan- African setting,” the College Commandant noted.