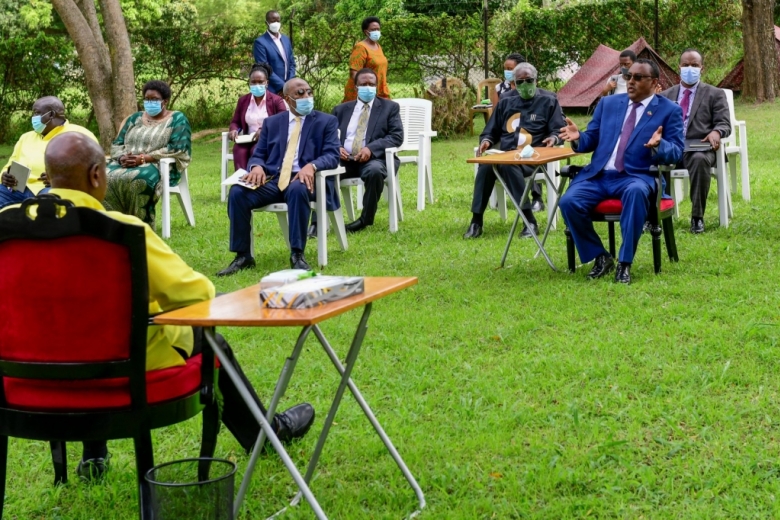 President Yoweri Kaguta Museveni has today held a meeting with the Deputy Prime Minister of Ethiopia, His Excellency Demeke Mekonnen Hassen and delegation at Gulu State Lodge where they discussed peace and security matters affecting Ethiopia.

According to reports thousands of Ethiopian refugees have continued pouring into Sudan, escaping a worsening conflict that has spilled over Ethiopia’s borders and threatens to destabilise the wider Horn of Africa region.

The United Nations refugee agency said on Sunday that more than 20,000 people have crossed into Sudan from Ethiopia’s northern Tigray region, where federal government troops are battling forces loyal to the Tigray People’s Liberation Front (TPLF), the party of the regional government. Sudanese state media put the number of refugees at almost 25,000.

President Museveni noted that it was wrong for African countries to focus on the politics of ethnicity federalism other than interest. He added that it was only oneness and focusing on the common interests of the people in Africa that could bring about prosperity.

“The problem in Africa is that we never discuss ideology but rather focus on diplomacy. We must watch out for our ideological mistakes. If we keep making them, the end results might be severe. Emphasis must be put on oneness and common interest,” he said.

President Museveni advised that, immediate negotiations must come into place to see to it that the war is not prolonged as it might lead to massive loss of lives and dwindling of the economy, adding that, because Ethiopia was one of the oldest countries in Africa and had never been colonized, it had an image to keep since it represents the whole of Africa.

His Excellency, Mr. Demeke noted that despite the current situation, government’s immediate plan was to see to it that the lives of the civilians are protected.