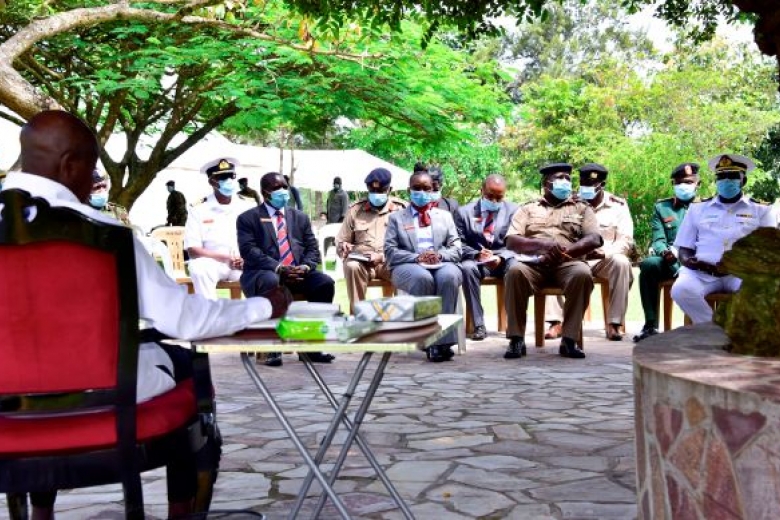 President Yoweri Kaguta Museveni has said East Africa has no alternative but to integrate and create a market for the regions goods and services and jobs for its people.

“We shall have to deal with issue of integration or collapse. We can take the Latin America way where there is a collapse then get a situation where people are running from countries like Mexico etc

People will wake up and know. The East African market is still having problems, but EA leaders have no alternative. Good thing Africans are not dying. In 1986 Ugandas’ population was 14 million now its 46million. Kenya is also 50million and Tanzania is about 60. We have no alternative, we must get jobs for our people,” he said.

Speaking about how to exploit Africas’ rich resources for its prosperity, President Museveni said there are four things that help produce a product in the modern times mainly; Labour (People to work), Natural resources (minerals, agriculture etc), Capital and Entrepreneurship (Somebody to have the eyes to see the opportunity and combine the other three, labour Resources, Capital to produce a products)

Mr. Museveni gave an in-depth lecture on the history of economic thought and cited the examples of Karl Max and Adam Smith – source of wealth of nations

He said Adam smith (source of wealth of nations) said when he has his breakfast, he eats bread made by bakers, drinks beer made by brewers and eats meat brought by butchers.

“When these people help him eat his breakfast, its not that they love him, they don’t even know him. They love themselves and in doing so they help love him. That’s how they made the western world to see importance of private sector,” he said, adding that while the private sector struggles to do its business but in so doing, it helps society. To answer question of natural resource for Africa, one thing we must do is appreciate importance of private sector whether local or foreign,” he said.

“He said all value comes from labour, emphasizing the importance of workers and that all value comes from labour. Soviet Union is powerful but forgot role of private sector including entrepreneurship created a problem. China did well because it combined government enterprises and private sector. The problem is some managers of the world; when I see Trump and Biden, Trump was saying America first, but you can’t say America First because you need the market of others,” he said.

According to the President, the next big contributor to history of economic thought was John Maynard Keynes

“When Smith helped the world to see importance of private sector, western countries grew very fast and produced a lot but they forgot that when you produce someone must buy. That’s what we are talking about EA. By 1929, that whole capitalist system collapsed because of depression. The production was big but demand was small. Maynard said, it maybe better to get somebody to dig a hole and cover it again; planting nothing.. but you pay him. He does nothing but you pay him. When you do that, he gets paid and goes to buy products. So that it helps factories operate. Without markets how do you continue production,” he said.

The President said for African resources to be meaningful, the continent must resolve two issues including peace.

“You must emphasize interest not identity then get peace which is crucial. Once you get that, encourage entrepreneurship and markets integration,” he said.

And Public service  whose jobs are limited.

“How will these grow if we don’t solve issue of markets? he asked.

On the issue of government funding, President Museveni said the IMF don’t have complete understanding of dynamics of economy, because they talk about no government intervention.

“In government there are two levels; micro-economic and macro- overall. Government can decide to buy milk and give it as aid to South Sudan to help us continue producing otherwise you can give up production,” he said.

The President said foreign companies are coming in, but there are areas that they cant invest in, like factory of commercial explosives. “Our people were asleep in grass thatched huts etc, NRM woke them up and they started building. The demand for cement and steel bars went up. But where are they? Now struggling to get them.

Some steel is not good for high rise buildings and dams yet Uganda has some of the best and purest steel but not exploited. There are no commercial explosives anywhere in Africa. You can’t import because Ships are afraid of carrying explosives, insurance high etc. even with money see what happened in Lebanon. A ship with explosives is like time bomb. Now we have built our own factory of commercial explosives for quarrying. If you don’t have government intervention how will you solve this,” he said.

“You’ve hard a long standing invitation to the National Defence College. One of the things that we profile and thrive on is lectures of personalities of grand standing level including President Uhuru Kenyatta and former President Kikwete, etc. We wish you good luck and when January is over, you can visit us and give us another lecture of opportunity to Community of the College in Nairobi. Wish you the best in January.

We wish you good health and success in everything that you do. I told my students to be alert and write everything so that we don’t miss anything and share with colleagues at college,” he said.