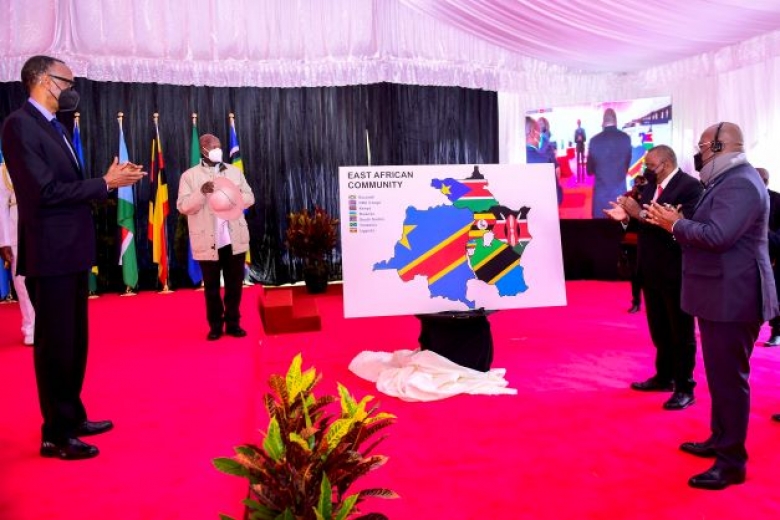 President Yoweri Museveni has said that to realize meaning full integration of the East Africa Community, there is need to prioritize prosperity, markets and security.

The President was speaking at the signing of the accession treaty by the Democratic republic of Congo to the East African Community, which took place today at State House Nairobi.

“If you want prosperity in Africa, the way forward is markets! To be able to negotiate for bigger markets in Africa and in East Africa. If I am a business man or business woman and I produce a product or service, how many people will buy from me.” he said.

Mr. Museveni reiterated the need for strategic security calling on member states for a united effort in ensuring security in the region.

President Museveni supported President Uhuru’s suggestion to have Swahili as a common language for East Africa saying that this will go a long way in uniting the people of the region who already share a lot of similarities in language and culture.

“To get to this commitment it has taken strong leadership and commitment to the ideals of the East African Community mission agenda and a clear understanding on the shared benefits that come   from working together,” he said.

Relatedly he paid glowing tribute to President Museveni for the zeal with which he galvanized support for the DRC to join the East African community.

President Uhuru said that the region has already started realizing the promise of the East African Community evident in the free movement of people, goods and services across the region. He said that this will lead to harnessing of business opportunities, strengthen economic muscle in the region and improve competitiveness of each member state for the benefit of all.

He pledged full cooperation with the new entrant to realize the mission of the East African community.

President Felix Tshisekedi on his part thanked heads of member states for expediting the vetting and negotiation since he applied to join the community  and promised to fulfill all the requirements of the accession.

President Paul Kagame of Rwanda welcomed the signing of the accession treaty for DRC saying that for long there has been a lot of talking but it's now time to work.

“DRC shares borders with Tanzania, Burundi, Rwanda. Her accession to the EA community which has hitherto been on bilateral level will now be cemented with the hope of maximizing exploitation of both natural and human resources in the region “ President Tshisekedi said.

Among those who attended were Members of Parliament, EALA members, members of the diplomatic core, and government officials.