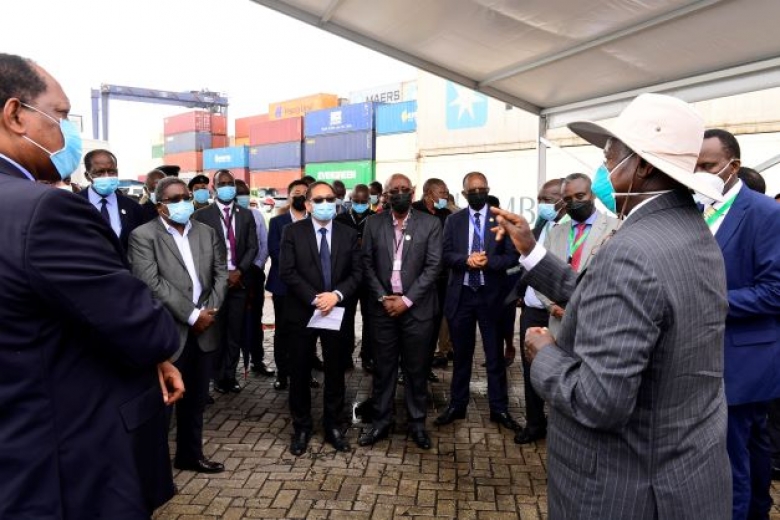 President Yoweri Museveni has directed the Minister of East African Affairs as well as the Uganda High commissioner to Tanzania to facilitate the setting up of Tanzania Ports Authority offices in Kampala, a move agreed upon by the two heads of State to fast track the transportation of goods and services for the new crude Oil pipeline and also ease the cost of doing business between the two countries.

During the tour, the President stressed the need for attitude change in doing business if the region is to achieve social economic transformation.

“Tanzanian was well known for political awareness but I am now happy that people have woken up to economic awareness through attitude change which was a big problem in the past. The private sector is the biggest driver of development. I am generally pleased with all the developments in Tanzania, but the most important is the attitude change,” he said.

Dar es Salaam Port is the Tanzania principal port with a rated capacity of 4.1 million (dwt) dry cargo and 6.0 million (dwt) bulk liquid cargo. It has a total quay length of about 2,600 metres with eleven deep-water berths. Dar es Salaam port handles about 95% of the Tanzania international trade and serves the landlocked countries of Malawi, Zambia, Democratic Republic of Congo, Burundi, Rwanda and Uganda. The port is strategically placed to serve as a convenient freight linkage not only to and from East and Central Africa countries but also to middle and Far East, Europe, Australia and America.

Later the President toured the Tanzania Standard Gauge Railway and noted that the pipe line and the SGR projects will go a long way in pulling in oil from other neighbouring countries including Uganda, DRC, South Sudan among others.

President Museveni noted that most of the countries were not any different from Africa but got rich because of being fast and also the attitude towards doing business and transformation.

He said once the region transforms four elements of its economy including low cost of transport, low cost of electricity, low cost of money in banks for manufacturing and agriculture as well as some of the services like tourism and hotel management, low cost of labour among others their economies will grow faster.

He urged Africans against fragmenting their market citing a contrast between North and South America where one is rich in natural resources but poor due to fragmented markets and the other has less resources but is the world’s biggest economy. He said that the African people should be their own tool for marketing their products.

The Tanzania Standard Gauge Railway (SGR) under construction will link the country to the neighboring countries of Rwanda and Uganda, and through these two, to Burundi and the Democratic Republic of the Congo. The new Tanzania SGR, is intended to replace the old, inefficient metre-gauge railway system and reduce road congestion. It is also expected to decrease freight costs by 40%. Each freight train is expected to transport up to 10,000 tonnes, equivalent to 500 lorry-loads. The project is being implemented in 5 phases: 202km Phase 1 (Dar es Salaam–Morogoro) Section, 348km Phase 2 (Morogoro–Makutopora) Section, 294km Phase 3 (Makutopora–Tabora) Section; 130km Phase 4 (Tabora-Isaka) Section, and 341km Phase 5 (Isaka–Mwanza) Section.

The President who was accompanied by Tanzania’s foreign minister Prof Palamagamba Kabudi said he was happy to be in Tanzania and share ideas, adding that one of the problems of Africa was lack of sharing ideas which has led the continent to lag behind.

He thanked his host President Suluhu Hassan for her hospitality and applauded the long standing relationship between the two brotherly countries. The function was attended by senior government officials as well as the business community.