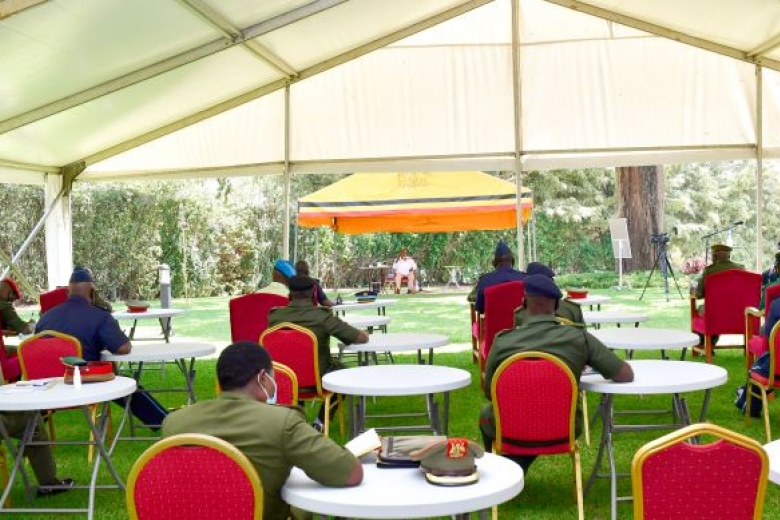 President Yoweri Museveni has said the principle of democracy played a big role in unifying the people of Uganda who had been divided along religious and tribal leanings but are now converged because of the line they took, of fronting interests other than identity that led to the creation of a national party.

“Democracy without a vision is sterile. It must be democracy to achieve something,” he said.

The President was yesterday giving an opportunity lecture to military students of the Republic of Zambia Command and Staff College who paid a courtesy call on him at State House Entebbe. The delegation of 13 students was led by Col. M.K. Mutila. Other members of the delegation included the Defense Attaché of Zambia to Tanzania Big. Gen. Mutilada.

Mr. Museveni said the next level was to build a national political party that brought people together because of similar interests. Other national institutions like the Judiciary, Civil Service, etc were built including a National Army that most African countries failed to do because of sectarianism.

The President said Uganda is back on its feet because of the principles of patriotism, Pan-Africanism, Socio-Economic transformation and Democracy following an era that had made it a failed state.

“The student movement towed the line of love Uganda, love Africa, Social-economic transformation and Democracy as the main principles for transforming society and achieving the middle income status,” he said.

He briefed the delegation of the turbulent political and economic history of Uganda, which had become a failed state adding that their student movement diagnosed the challenges facing the country and counteracted the bad politics of sectarianism practiced by the past regimes.

He told his guests that their student group adopted the principle of social economic transformation with the aim of transforming the society from the traditional way of life to modernity and eventually to middle income status.

He said that is why universal education, skill and intellectual development were introduced to push the program of social economic transformation.

Commenting on some of the concerns raised by the students on the challenges of unifying the people of Uganda, President Museveni said the main problem was to tame the 2 groups of people who were opportunists and obscurantists who were blocking the truth.

“They said we were not realistic, that we were idealists aiming at things that are not achievable. But the student movement became a committed armed force and because of the discipline and dedication they were able to win the hearts of the people,” he said.

The delegation that commenced its tour of Uganda on Monday September 27th, has visited various institutions and will return to Zambia on Saturday the 2nd October 2021.